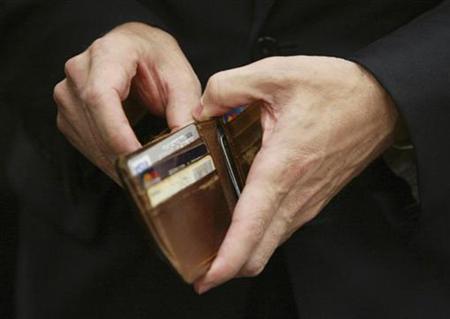 U.S. Treasury Secretary Timothy Geithner puts a piece of foreign currency back in his wallet after showing off the contents of his wallet to a photographer during a break in his testimony before the House Appropriations Subcommittee on General Government and Financial Services on Capitol Hill in Washington, May 21, 2009.
Credit: Reuters/Jim Bourg

NEW YORK (Reuters) – The number of U.S. consumers who filed for bankruptcy protection in 2010 was the highest in five years, and the figure could rise as Americans struggle with excess debt in an uncertain economy, a report issued Monday said.

Roughly 1.53 million consumer bankruptcy petitions were filed in 2010, up 9 percent from 1.41 million in 2009, according to the American Bankruptcy Institute, citing data from the National Bankruptcy Research Center.

The full-year total is the highest since the 2.04 million recorded in 2005, when there was a rush to seek bankruptcy protection ahead of a stricter federal law taking effect in October of that year.

Samuel Gerdano, executive director of the ABI, said filings are rising even as consumers try to cut spending and debt after the 2008 financial crisis and accompanying recession, and with the unemployment rate at 9.8 percent.

He said there is usually a 12- to 18-month lag between declines in consumer spending and bankruptcy levels.

According to the Federal Reserve, U.S. consumer credit outstanding has fallen in 19 of the last 21 months for which data are available, declining to $2.41 trillion in October 2010 from $2.57 trillion in January 2009.

“Consumers have been on sort of a strike when it comes to taking on more debt, as they become more aware of the dangers of high debt burdens in a weak economy,” Gerdano said.

Robert Lawless, a bankruptcy professor at the University of Illinois College of Law in Champaign, said the pace of filings may peak in early 2011 but that full-year filings could drop by a single-digit percentage.

“Consumer debt is declining, which means the incentive for taking the legal step of filing for bankruptcy is going down,” he said. “I suspect borrowing demand has also gone down, but the bigger reason is that lenders are less willing to lend.”

“The (2005) law was supposed to reduce filings, but we are very close to levels we were at then,” Gerdano said. “The laws of economic gravity are more powerful than the laws passed by Congress.”