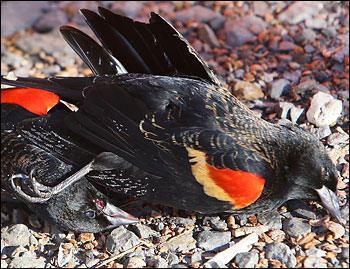 Keith Stephens, a spokesman for the Arkansas Game and Fish Commission, provided the new numbers.

Residents of the small town of Beebe awoke Saturday to find thousands of dead blackbirds littering a 1.5-square-mile area. The birds inexplicably dropped dead, landing on homes, cars and lawns.

Violent weather rumbled over much of the state Friday, including a tornado that killed three people in Cincinnati, Ark. Lightning could have killed the birds directly or startled them to the point that they became confused. Hail also has been known to knock birds from the sky.

The director of Cornell University’s ornithology lab in Ithaca, N.Y., said the most likely suspect is violent weather. It’s probable that thousands of birds were asleep, roosting in a single tree, when a “washing machine-type thunderstorm” sucked them up into the air, disoriented them, and even fatally soaked and chilled them.

“Bad weather can occasionally catch flocks off guard, blow them off a roost, and they get hurled up suddenly into this thundercloud,” lab director John Fitzpatrick said.

Rough weather had hit the state earlier Friday, but the worst of it was already well east of Beebe by the time the birds started falling, said Chris Buonanno, a forecaster with the National Weather Service in North Little Rock.

If weather was the cause, the birds could have died in several ways, Fitzpatrick said. They could easily become disoriented — with no lights to tell them up and down — and smack into the ground. Or they could have died from exposure.

The birds’ feathers keep them at a toasty 103 degrees, but “once that coat gets unnaturally wet, it’s only a matter of minutes before they’re done for,” Fitzpatrick said.

Lightning or hail are also possibilities.

Karen Rowe, an ornithologist for the state commission, noted that in 2001 lightning killed about 20 mallards at Hot Springs, and a flock of dead pelicans was found in the woods about 10 years ago. Lab tests showed that they, too, had been hit by lightning.

Moreover, in 1973 hail knocked birds from the sky at Stuttgart, Ark. Some of the birds were caught in a violent storm’s updrafts and became encased in ice before falling from the sky.

Rowe noted that birds of prey and other animals, including dogs and cats, ate several of the dead blackbirds and suffered no ill effects.

“Every dog and cat in the neighborhood that night was able to get a fresh snack that night,” Rowe said.

Mike Robertson, the mayor in Beebe, said the last dead bird was removed about 11 a.m. Sunday in the town about 40 miles northeast of Little Rock. A dozen workers hired by the city to do the cleanup wore environmental-protection suits for the task.

Robertson said the workers wore the suits as a matter of routine and not out of fear that the birds might be contaminated.

“It started at 7 a.m., picking up birds on the street, in the yards, been run over. It’s just a mess,” Beebe Street Department supervisor Milton McCullar told WISC-TV.

Several hundred thousand red-winged blackbirds have used a wooded area in the town as a roost for the past several years.

Robertson and other officials went to the roost area over the weekend and found no dead birds on the ground.

“That pretty much rules out an illness” or poisoning, the mayor said.

But some residents voiced concerns.

“I’ve been to Iraq and back and not seen nothing like this,” Beebe resident Jeff Drennan told local Fox16 News on Sunday.

4 thoughts on “US: Up to 5,000 Blackbirds Fall Dead Out of The Sky, Autopsies Find No Poison”