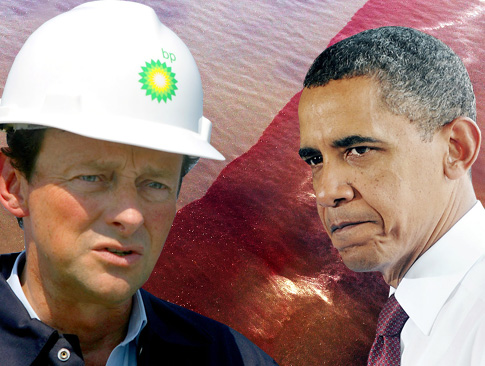 Obama was the largest recipient of campaign donations from BP

Dec. 22 — BP and the government famously declared that most of the oil had disappeared.

I have repeatedly pointed out that BP and the government applied massive amounts of dispersant to the Gulf Oil Spill in an effort to sink and hide the oil. Many others said the same thing.

BP and the government denied this, of course.

But the oil is not remaining hidden.

Indeed, as the Wall Street Journal noted on December 9th:

A university scientist and the federal government say they have found persuasive evidence that oil from the massive Gulf of Mexico spill is settling on the ocean floor.

The new findings, from scientists at the University of South Florida and from a broad government effort, mark the latest indication that environmental damage from the blowout of a BP PLC well could be significant where it’s hardest to find: deep under the Gulf’s surface.

Scientists who have been on research cruises in the Gulf in recent days report finding layers of residue up to several centimeters thick from what they suspect is BP oil.

The material appears in spots across several thousand square miles of seafloor, they said. In many of those spots, they said, worms and other marine life that crawl along the sediment appear dead, though many organisms that can swim appear healthy.

Tests now have started to link some oil in the sediment to the BP well could add to the amount of money BP ends up paying to compensate for the spill’s damage.

The test results also raise questions about the possible downsides of the government’s use of chemical dispersants to fight the spill.

Under federal direction, about 1.8 million gallons of dispersants were sprayed on the spilled oil in an effort to break it up into tiny droplets that natural ocean microbes could eat up. At the time, officials said the dispersants shouldn’t cause oil from the spill to sink to the seafloor. However, more recently, a federal report said dispersants may have helped some spilled oil sink to the sediment.

Scientific teams have reported in recent months finding a strange substance on the Gulf floor, in some cases as far as about 80 miles from BP’s ill-fated Macondo well, which blew out in April and spilled an estimated 4.1 million barrels of oil into the Gulf before it was capped.

***”The chemical signatures are identical,” said Mr. Hollander, who found the contaminated samples in an area of the Gulf floor off the Florida Panhandle. Although it’s conceivable the tests could show a false match with the BP oil, “the statistical probability of something like that is unimaginable,” Mr. Hollander said.

The federal government also has found oil matching Macondo oil in Gulf sediment, Steve Murawski, a top National Oceanic and Atmospheric Administration scientist, said in an interview. He declined to disclose how much sediment contamination the government found, or exactly where in the Gulf it was, saying experts still are analyzing the test results.

***Samantha Joye, a University of Georgia oceanographer, also has found what she believes to be evidence of BP oil in Gulf sediment. She is awaiting lab results tracing the chemical fingerprints of sediment samples she took.

On a research cruise in the Gulf that ended Friday, she saw worms that crawl along the Gulf floor “just decimated,” she said. But eels and fish, which can swim away, often appeared fine, she said.

The Journal noted on December 18th:

Oil from BP PLC’s blown-out well has lodged in the sediment of the Gulf of Mexico at levels that may threaten marine life, according to a federal report released Friday.

There is no practical way to clean up the spilled oil that has settled deep in the Gulf, officials said, adding that microbes in the water could eventually eat it up.

The massive application of dispersants to hide the amount of oil spilled has caused major problems to the Gulf:

As I noted in May – shortly after the spill started – the responses of the government to the Gulf Oil spill and to the financial crisis are remarkably similar, as both have focused on covering up the problems, instead of actually fixing them. Because the financial system was never really reformed, the next financial shock will send the economy reeling. Because the oil was never properly cleaned up, the next hurricane will stir up immense quantities of oil now lying on the sea floor.

Extend-and-pretend is being attempted in both cases, and – in both cases – it will fail, because nothing has been fixed, and the fundamentals can only remain hidden for so long.

Moreover, in both cases, the government used “highly toxic” measures to try to hide the real problems. The government has used “emergency measures” and virtually all of its resources to prop up the giant banks instead of using the proven methods of restructuring insolvent banks and prosecuting the criminals who caused the crisis, which has caused major problems for the real economy.

Similarly, the government applied close to 2 million gallons of highly toxic dispersant to hide the amount of oil instead of using it’s resources to deploy tried-and-true clean up methods, which has caused significant problems for the Gulf.

Finally, new and potentially bigger crises will take place, because regulation hasn’t been put in place to prevent them. Regulation of the financial system – including international agreements like Basil III – have been gutted (and see this). And as Time magazine notes:

Congress never managed to pass legislation that would have overhauled drilling safety.

1 thought on “The Oil BP Tried To Hide Has Been Discovered, In Thick Layers On the Sea Floor Over An Area of Several Thousand Square Miles”