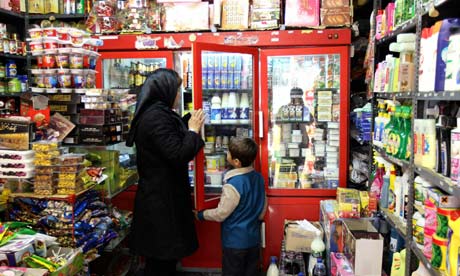 An Iranian woman and a boy shop at a grocery store in Tehran. Photograph: Atta Kenare/AFP/Getty Images

Iranians are facing huge increases in fuel and food prices after Tehran began implementing a long-delayed plan to slash subsidies amid political controversy and fears of a fresh wave of popular unrest.

Riot police were deployed on main squares and at petrol stations in the capital and in other big cities as the new price regime came into force today.

Opposition websites reported drivers rushing to fill petrol tanks and long queues at cash machines as Iranians withdrew money paid to poor families to compensate for the subsidy cuts. Ferries at Bandar-Abbas on the Persian Gulf were not operating in protest against the steep rise in petrol prices.

The ILNA news agency said the price of petrol had risen fourfold; gas more than fivefold; and electricity almost threefold. Flour and bread prices are also to go up.

President Mahmoud Ahmadinejad called the reform the “biggest surgery” Iran’s economy had experienced in half a century.

Last month he warned protesters not to exploit the situation, saying they would “regret it for ever”, as the Green opposition movement sought to capitalise on discontent with an economy worsened by the impact of UN sanctions.

The economic plan was due for a September launch but repeated delays were seen as evidence of profound anxiety among the government about the effect.

Subsidies kept the price of flatbread to 1,000 rials (6p) before it rose sharply in recent months. Inflation is officially around 10%, though economists suggest far higher for food and other staples.

Economist Fariborz Raisdana was arrested this morning after an interview he gave to BBC Persian – a move seen as a clear signal of official readiness to crush protests about the cuts. Iran also arrested four activists, Hadi Heidari, an opposition cartoonist, Fatemeh Arabsorkhi, Mohammad Shafeei and Alireza Taheri.

The introduction of petrol rationing in 2007 triggered riots, and Iranians appear to be most concerned about the cost of public transport this time around.

“I saw lots of riot police on my way to the university,” said Behnam Visme, a student. “Everyone was worried about the rise in the taxi fares and utility bills.”

Babak Shirazi, a teacher, said: “Petrol is a sensitive issue for Iranians, because most people take taxis or buses and the fares are directly related to petrol prices.”

Assessing Iran’s economy is complicated by a lack of reliable data and a high degree of secrecy.

“Understanding the economy is like a jigsaw with a huge number of pieces that you have to put together and even then there’s still a lot of speculation,” said one western Iran watcher.

“The government has been very anxious about the prospect of subsidy removal,” said Ali Ansari, of St Andrews University. “They feel there could be the potential for serious civil disturbance, and they are probably right.”

Reform has been long promised and is considered urgent as subsidies for foodstuffs and fuel are estimated to cost the government between $70bn (£45bn) and $100bna year – about a quarter of GDP. But compensation payments will impose a new burden and state enterprises will be protected, reducing any savings.

Hassan Hakimian, an expert on Iran’s economy, said cutting subsidies was a far bigger challenge than countering the effect of  UN and other sanctions imposed over Tehran’s nuclear programme.

“The cuts will unpopular but they are a necessary medicine. Most Iranian economists don’t so much question the need for reforms but the manner in which they are implemented, as well as weak management and a lack of transparency,” he said.

Ahmadinejad’s critics have focused on his failings in this area. Grand Ayatollah Nasser Makarem Shirazi, a leading scholar in Qom, recently accused the government of lying about the economic situation. “Statistics about reducing inflation are constantly released but contradict what the people see with their own eyes,” Shirazi was quoted as saying. “When state statistics don’t correspond with reality, people lose confidence in government.”

The economic daily Donya-e Eqtesad said the scheme broke a long addiction to subsidies. “Major economic reforms have inevitable woes,” the paper said. “If we do not undergo them today we will be forced to do so tomorrow.”