And everybody seems to find snow in midsummer wonderful???

Australia normally experiences temperatures of 86F (30C) at this time of year, but the chances of a rare white Christmas have increased after plunging temperatures and snow swept across the east of the country. 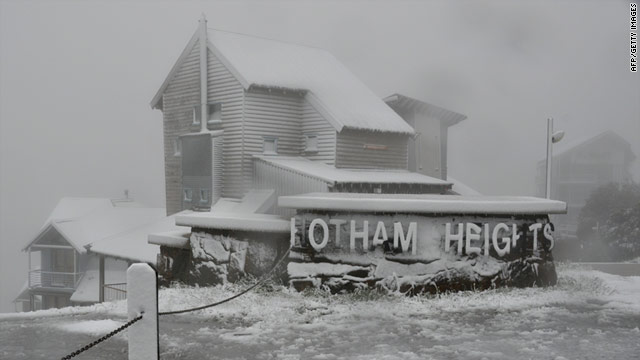 Freezing winds from Antarctica, blown up to Australia by a low-pressure system in the Southern Ocean, gave the country a taste of the conditions that are causing havoc across Europe.

Some 11 inches of snow fell at the ski fields in New South Wales, raising the prospect that parts of the country could experience a white Christmas.

“It’s white, everything is white,” Michelle Lovius, the general manager of the Kosciuszko Chalet Hotel at Charlotte Pass, said.

“First thing this morning everything was just very still, very peaceful and every single thing was just blanketed in a thick cover of white.”

At the ski fields, children in Father Christmas hats, who would usually be sunning themselves on the grassy slopes, made snowballs and rode on sleds.

Miss Lovius said such a large amount of snow was unusual for early December, normally the peak of the wild flower season in the mountainous region.

“We’re hoping that it (the cold) stays in for five days and we get a white Christmas,” she said.

In one part of the state temperatures dropped as low 39.2F (4C), the coldest December morning in 54 years, according to the Weather Channel.

Further south in the state of Victoria, Mt Hotham had four inches of snow and Mt Buller up to two inches.

“It is a blanket of white, which is beautiful at this time of year.

The cold blasts even blew into Sydney, where the temperature fell to an unseasonably cold 55F (13C), and dipped to 49.6F (9.8C) in the city’s west while winds of up to 62 miles an hour swept along much of the state’s coastline.

Extreme weather in other parts of the country caused the worst flooding in 50 years.

In the isolated the town of Carnarvon, 560 miles north of Perth, swiftly rising waters led to widespread damage to crops and cattle stations.