Iran has hanged 11 men it says were members of a terrorist group responsible for a suicide bombing which claimed the lives of 39 people. 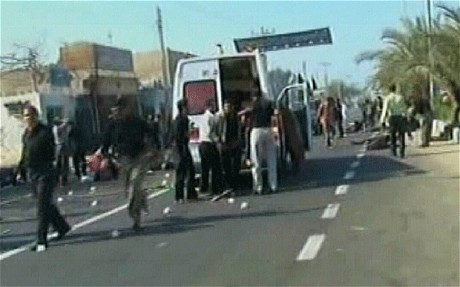 An image grab taken from footage broadcast by Al-Alam TV on December 15, 2010, shows the site where a suicide bomber blew himself up during a Shiite religious procession in the Iranian city of Chabahar Photo: AFP/GETTY

The executions were seen as retribution against Jundullah, a feared terrorist group which had claimed responsibility last week’s attack in the south-eastern port city of Chabahar. Jundullah said the bombing, which targeted worshippers observing a solemn day of mourning, was carried to avenge the hanging of its leader, Abdulmalik Rigi, earlier this year.

“Eleven members of the terrorist group and mercenaries who had a role in terrorist activities, fighting police and killing innocent people were hanged,” said Ebrahim Hamidi, head of the Justice Department of the southeastern province of Sistan-Baluchistan. The executions took place at dawn in Zahedan, the provincial capital of Sistan-Baluchistan.

IRNA, an official news agency, identified all 11 men, which indicated that they were members of the Sunni ethnic Baluchi minority.

Jundullah says it is fighting for the rights of the Baluchi minority in the remote Sistan-Baluchistan, which it says suffers discrimination at the hands of Iran’s leadership.

Iran has accused the group of links to al-Qaida, and claims its members are being trained in Pakistan.

Mr Hamidi said all 11 men were convicted in a fair and open trial, and accused them of involvement in past attacks that killed 15 policemen and 12 members of the Revolutionary Guards – Iran’s most powerful military force. The men were also accused of supplying arms and refuge to terrorists, armed kidnapping and arms smuggling.

Jundullah has claimed responsibility for a series of deadly attacks on the military and civilians in eastern Iran over the past years.