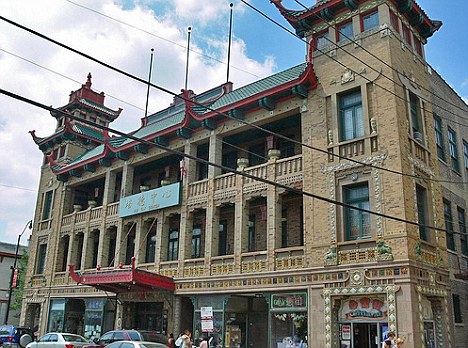 Discipline: The Pui Tak Christian School (pictured) have defended their actions of taping up the four-year-old using duct tape

Teachers tied a four-year-old boy’s hands up with duct tape after he misbehaved in class, it was claimed today.

The child’s father Harold Irving said he was totally stunned when he arrived at the Pui Tak Christian School in Chicago’s Chinatown to discover his son trussed up last Wednesday.

But the school insisted that the boy had struck two staff members and acted out of control and needed to have his wrists taped up.

Mr Irving, a former police officer, told the Chicago Sun-Times: ‘I received a call from the school informing me that my son was in the principal’s office because he refused to take a nap, and he didn’t want to wash his hands.

‘I told them that I would come and pick him up. I arrived shortly after that and found him standing there with his hands duct-taped together.

Mr Irving, who also has a seven-year-old daughter at the school, filed a complaint with police alleging unlawful restraint and contacted the Illinois Department of Children and Family Services.

‘You teach kids to respect authority and that [school administrators] are there as advocates to protect them,’ Mr Irving continued. ‘They failed us because they didn’t protect our child.

‘We thought we had found such a school, especially since it is Christian-based and we are a God-fearing people.

‘We have to pull our daughter out because she can’t very well be in a school where something like this has occurred.’

The executive director of the school, David Wu, defended the action of vice principle of school, June Gin.

‘A four-year-old student, who was being disruptive during the class’ nap time, was brought to the school’s office,’ he wrote in an e-mail to the Chicago Sun-Times.

‘On the way to the office and in the office, he repeatedly struck two of our staff members and acted out of control.

‘A few minutes before the father arrived, our vice principal loosely taped his long-sleeved shirt sleeves together to restrain his hands. This was an effort to keep him from injuring himself and others.’

In a statement Mr Wu said the school is fully cooperating with DCFS, who have confirmed that they are investigating the incident.

The Pui-Tak Christian School serves more than 130 children in pre-kindergarten through to sixth grade and fees are over £2,300-a-year, per child.