I told you about the  documentary I saw (aired by a BIG German TV station) before: For an unbelievable cheap price you can get a suitcase nuke!

The elite is getting nervous and with another inside job of unprecedented proportions they could get the sheep back on track, declare martial law and find a reason to attack Iran.

The elite has everything in place to completely (The elite already owns the government, the Fed, the media and the big corporations and has bankrupted America and now they want to totally enslave Americans.) take over the United States of America:

– US government can execute its own citizens far from a combat zone, with no judicial process and based on secret intelligence!:

“The notion that the government can, in effect, execute one of its own citizens far from a combat zone, with no judicial process and based on secret intelligence, makes some legal authorities deeply uneasy.“ (The New York Times)

… has a nice CIA rendition and torture program

… has deployed military combat units within the US in violation of the Posse Comitatus Act (See this, this , this, this and this.),

… has everything in place so that their elite puppet of choice can become the absolute dictator that has to answer to no one (See this, this, this, this and this.)

The elitists tried before to install a fascist dictatorship in the US. And it looks like that this time they are coming even closer to reach their goal.

These are the same criminal families that helped and financed Hitler’s rise to power. 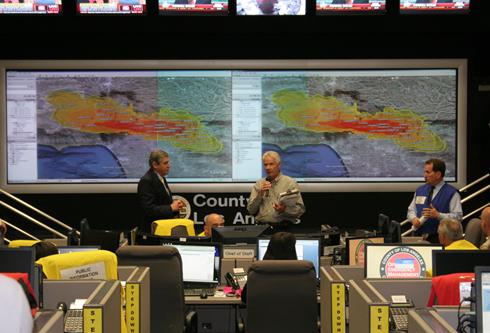 Dec. 16 (USA TODAY) — The plotters decided to trigger their bomb in Los Angeles during the morning rush, at a metro station a stone’s throw from Universal Studios and the set where Steven Spielberg filmed scenes from “War of the Worlds.”

This was no ordinary explosive. It was a 10-kiloton nuclear device packing roughly the destructive force of the Hiroshima bomb. A blast of that magnitude could engulf 50,000 to 150,000 people and reduce parts of L.A., Hollywood and Studio City — the historical heart of the movie industry — to radioactive rubble.

Al-Qaeda played no part in planning the July 28 attack. The conspirators were the leaders of a dozen state, local and federal agencies who were taking part in a simulated L.A. County security exercise code-named Operation Golden Phoenix. Their mission: to assure that if a terrorist does detonate a nuke in Los Angeles, first responders will be prepared to wade into the devastation and rescue survivors suffering from traumatic injuries, radiation sickness, shock and flash-blindness.

“This is a survivable event,” says Brendan Applegate, of the Naval Postgraduate School Center for Asymmetric Warfare, who helped design and carry out the exercise. “L.A. isn’t going to fall into the ocean and be gone forever. It will be a really bad day, but we need everyone to show up to work and save lives.”

“We’re working with surrounding states and counties on regional plans that address the threat of an IND (improvised nuclear device),” says Kelly McKinney, New York City’s Deputy Commissioner for Planning and Preparedness from the Office of Emergency Management.

For many people, nuclear weapons conjure up Cold War bomb shelters, civil defense drills and mutually assured destruction. That threat faded in 1991 with the collapse of the Soviet Union, says Irwin Redlener, of Columbia University’s National Center for Disaster Preparedness. The new nuclear threat, he says, is a terrorist blowing up an improvised bomb in a U.S. city.

National security adviser John Brennan said in April that nuclear weapons are the “ultimate and most prized goal of terrorist groups.” Brennan issued his assessment at President Obama’s Nuclear Summit, an effort to rally world leaders to lock down loose nukes and shrink the odds that terrorists can launch what Obama called the “single biggest threat to U.S. security.”

In November, McKinney says, DHS provided state and local emergency response agencies across the USA with another preparedness tool. The 40-page guide, Nuclear Detonation Preparedness: Communicating in the Immediate Aftermath, carries fill-in-the-blank messages authorities can use to guide a frightened populace if a blast should occur.

“Shelter in place. That’s the single biggest message,” says Jonathan Fielding, L.A. County health director. “That’s the best way to save lives and prevent radiation-related illnesses. It runs counter to your basic instinct to get away and reunite with family members. If their kids are in school or in day care, that’s where they should stay,” he says.

Buddemeier led the study of nuclear blasts in the nation’s six target cities for DHS. He drew on data from 1,000 Cold War nuclear tests and sketchy reconstructions of the impact of the A-bombs dropped Japan.

Buddemeier’s mantra: Stay in, stay safe. Wait for instructions. “You can’t outrun a fallout cloud,” Buddemeier says, “and fatalities from fallout are 100% preventable.”

Without any shelter for 24 hours, he says, 285,000 people caught in the L.A. blast would develop radiation sickness or die. Just getting into a wood-frame house could save 160,000 people. Adequate shelter in a shallow basement or a two- or three-story building could save 240,000 of the 285,000; the rest would get sick but survive. “If you can get into an underground parking garage or the core of an office building, you’d have no significant exposure at all,” he says.

In the fictional Golden Phoenix scenario, intelligence agencies have reported that domestic extremists with ties to al-Qaeda have obtained weapons-grade uranium and are planning to set off a device. The possible targets include Seattle, San Francisco, L.A., Chicago, New York and Washington, D.C. In response to the threat, remote radiation sensors have been deployed throughout the USA. After the L.A. blast, detectors pick up a second nuke in Washington, D.C.; it is detonated but fails to explode.

It is hard to imagine a more potent symbol of terror than a nuclear detonation. Bystanders miles away would witness a 100-mph fireball shooting five miles into the sky. Sun-surface heat, hyperexplosive pressures and 900-mph winds would level buildings for half a mile. Between 50,000 and 100,000 people would vanish in smoke and flame. Flash-blind drivers 10 miles away would crash, blocking evacuation routes. Fallout would rain down for hundreds of miles, according to the White House’s Planning Guidance for Response to a Nuclear Detonation,posted on the Internet in June.

“A nuclear attack would be like 9/11 on steroids,” says Anne Norwood of the University of Pittsburgh Center for Biosecurity, an expert on the mental health impact of disasters. “You’re never prepared psychologically. … It would be a challenging moment in world history.”

It would be hard to overstate the consequences, especially if a target is Washington, says Craig Fugate, administrator of the Federal Emergency Management Agency (FEMA).

“When we talk about resiliency, we’re not talking about how to be resilient against a flood,” he says. “It’s a question of how do we, as a nation, preserve constitutional government if an event like this occurs.”

The government would be preoccupied with so many tasks — identifying the culprit; tracking the effects of the blast; securing government buildings; ushering critical personnel to safe locations; amassing drugs and supplies — that federal help won’t arrive for 24 to 72 hours, the White House guidance says.

“Don’t bother to dial 911,” says John Fernandes, director of L.A. County’s division of emergency management. “Most likely you’re not going to have 911. The cell towers are going down.”

In all likelihood, with local fire departments and hospitals crippled, “the first response will be neighbors helping neighbors,” FEMA’s Fugate says.

In response to the L.A. blast, more than a dozen local, state and federal agencies activate emergency operations centers. An anchor for the fictional Exercise News Networkbreaks into the drive-time broadcast: “I’m Will Kohlschreiber… following up on our lead story. … Just after 7:30 a.m. Pacific Time, a large explosion rocked the Los Angeles area. The effects of the blast (have) … thrown Southern California into chaos.”

Personal preparedness is critical, because most regions of the U.S. are unprepared for a terrorist nuclear attack, emergency response experts say. “The reality is that we’re extremely vulnerable to the impact and consequences of nuclear terrorism in ways that shouldn’t be the case nine years after 9/11, says Redlener, author of Americans at Risk: Why We’re Not Prepared for Megadisasters and What We Can Do Now.

Redlener notes that an analysis of where New Yorkers would go in the wake of a nuclear detonation indicated that as many as 5 million or 6 million people would “scatter randomly through at least eight states, into relatively small communities that would be confronted with thousands of injured, sick, terrified people who had been evacuated in the face of great danger and anxiety.”

Applegate, the Golden Phoenix planner, says the exercise confirmed what emergency response workers knew at the start: Southern California and its neighboring states need a regional plan for dealing with the emergency. Michael Cline, Virginia’s emergency response coordinator, says the National Capital Region lacks a regional plan for dealing with a nuclear blast, though state and local agencies include nuclear readiness as part of an all-hazard preparedness program.

After the Golden Phoenix explosion, emergency managers in operations centers throughout Southern California track fallout billowing across video screens. In a command center called the “white cell,” exercise manager Applegate and his team play overwhelmed authorities who are trying, and often failing, to help. Some callers get busy signals. Others are told that desperately needed supplies were destroyed in the blast — or that they’re being held in reserve “in case another bomb goes off,” Applegate says. Perhaps the most wrenching question of all: Should first responders risk excess radiation to save more lives? Or should they save themselves?

Nuclear proliferation experts are divided on terrorists’ odds of success. Most classify a terrorist strike as a “low probability, high consequence” event.

“The probability in my view is so low that it’s not worth spending a lot of money to deal with it,” says John Mueller of Ohio State University, author of Atomic Obsession: Nuclear Alarmism from Hiroshima to Al-Qaeda. Mueller says it’s highly unlikely that terrorists could get enough highly enriched uranium, build a bomb, sneak it into the USA and trigger it without getting caught.

Some evidence suggests otherwise. The 9/11 Commission reported in 2004 that al-Qaeda has been trying to “acquire or make” nuclear weapons for a decade. The International Atomic Energy Agency has logged 421 reports of lost or stolen nuclear materials from member states. The U.S. has lost at least 11 nuclear weapons, according to Harvard’s Belfer Center for Science and International Affairs.

Given these reports, Rick Nelson, an intelligence expert at the Center for Strategic and International Studies, holds a different view. “I think in my lifetime I’ll see the detonation of a nuclear device. I do,” he says.

If the plotters succeed, FEMA’s Fugate says, those caught in the aftermath can make a big difference. “Survivors aren’t victims,” he says. “They’re rescuers.”