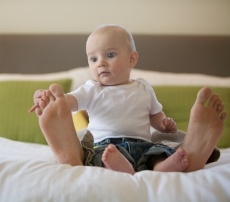 Babies who watch TV are more likely to have delayed cognitive development and language at 14 months, especially if they’re watching programs intended for adults and older children. We probably knew that 24 and Grey’s Anatomy don’t really qualify as educational content, but it’s surprising that TV-watching made a difference at such a tender age.

Babies who watched 60 minutes of TV daily had developmental scores one-third lower at 14 months than babies who weren’t watching that much TV. Though their developmental scores were still in the normal range, the discrepancy may be due to the fact that when kids and parents are watching TV, they’re missing out on talking, playing, and interactions that are essential to learning and development.

This new study, which appeared in the Archives of Pediatric and Adolescent Medicine, followed 259 lower-income families in New York, most of whom spoke Spanish as their primary language at home. Other studies examining higher-income families have also come to the same conclusion: TV watching not only isn’t educational, but it seems to stunt babies’ development.

But what about “good” TV, like Sesame Street? The researchers didn’t find any pluses or minuses when compared to non-educational programs designed for small children, like SpongeBob SquarePants. Earlier research by some of the same scientists, most of whom are at New York University School of Medicine-Bellevue Hospital Center, has found that parents whose children watch non-educational TV programs like Spongebob SquarePants spend less time reading to their children or teaching them.

At this point, parents reading this are probably saying D’oh! TV is so often a parent’s good friend, keeping kids happily occupied so the grownups can cook dinner, answer the phone, or take a shower. But clearly that electronic babysitter is not an educational aid.

The bottom line: This latest study adds more fuel to a recommendation from the American Academy of Pediatrics that babies under age 2 watch no TV at all. If you’ve just got to watch Dexter, it’s best to make sure the tots are fast asleep.