Sure nothing will happen, but this is not because Interpol could not immediately arrest Dick Cheney:

So here’s the bottom line:

INTERPOL, an international law enforcement agency, has just been granted complete and utter “diplomatic immunity” within the borders of the United States, courtesy of Obama. They are not subject to any Constitutional limitations within the United States. Good luck filing for discovery, documents, witnesses or subpoenas against a police force that is operating outside of the Constitution in your own country! You can’t sue them. Their records can’t be searched. They are not subject to FOIA requests. You probably won’t even know the name of the agent prosecuting you if INTERPOL comes to visit. And they don’t have to tell you either.

And to track down Dick Cheney should be an easy task. 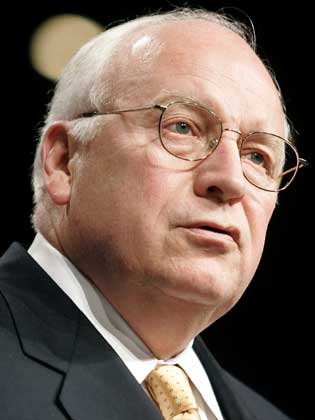 The energy services company Dick Cheney ran prior to becoming Vice President of the United States was atop the tongue of liberals each time it was awarded a contract in Iraq.

Now the company’s name, Halliburton, is being spoken somewhere else: Nigeria.

According to a story filed late Wednesday, Cheney will be indicted in a Nigerian bribery case as part of an investigation into an alleged $180 million bribery scandal.

“Last week, Nigeria arrested at least 23 officials from companies including Halliburton, Saipem, Technip and a former subsidiary of Panalpina Welttransport Holding AG in connection with alleged illegal payments to Nigerian officials. Those detained were all freed on bail on Nov. 29,” Bloomberg News’ Elisha Bala-Gbogbo wrote.

“Authorities in the West African nation are probing Halliburton, Saipem and Technip for the alleged payment of $180 million in bribes to win a $6 billion liquefied natural-gas contract,” Bala-Gbogbo added. “Panalpina is being investigated for illegal payments it allegedly made to Nigerian customs officials on behalf of Royal Dutch Shell Plc.”

The prosecuting counsel for the country’s Economic and Financial Crimes Commission said that indictments will be handed down in the next three days and that an arrest warrant for Cheney “will be issued and transmitted through Interpol.”

Adds Bloomberg, “Obla said charges will be filed against current and former chief executive officers of Halliburton, including Cheney, who was CEO from 1995 to 2000, and its former unit KBR Inc., based in Houston, Texas; Technip SA, Europe’s second-largest oilfield- services provider; Eni SpA, Italy’s biggest oil company; and Saipem Construction Co., a unit of Eni. Obla didn’t identify the former officials whom he said held office when the alleged bribes were paid.”

The US Securities and Exchange Committee probe focused on the deal as early as 2004. Wrote The Washington Post at the time:

The Nigerian project, started in the early 1990s, was worth almost $5 billion to TSKJ, a partnership that included a KBR predecessor, as well as companies from France, Japan and the Netherlands.

At issue are payments made to Tristar, a Gibraltar company that had a consulting arrangement with a corporation formed by TSKJ to “administer the contracts and execute the work” in Nigeria, a Halliburton spokeswoman said in response to questions.

KBR, the engineering and construction subsidiary of Halliburton, was formed when Halliburton acquired Dresser Industries Inc. in 1998. It was a combination of Halliburton’s Brown & Root and Dresser’s M.W. Kellogg Co. Officials from the SEC and Cheney’s office declined to comment.

Early on Thursday, Halliburton said they hadn’t seen the new charges, but still denied their involvement.

“Halliburton’s oil-field services operations in Nigeria have never in any way been part of the LNG project and none of the Halliburton employees have ever had any connection to or participation in that project,” Tara Mullee Agard, a spokeswoman for the Houston-based company, said in an e-mailed response to Bloomberg.