California approves use of pesticide linked to cancer 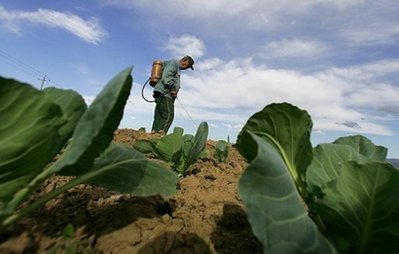 A farmer spraying pesticide on a crop of vegetables. Long-term exposure to pesticides may increase the risk of Alzheimer’s disease and other forms of dementia, according to a study released Thursday.

FRESNO, Calif. – California regulators approved a pesticide Wednesday for use by fruit and vegetable growers despite heavy opposition from environmental and farmworker groups that cited its links to cancer.

The state Department of Pesticide Regulation will register methyl iodide as a substitute for the pesticide methyl bromide, which is being phased out by international treaty because it depletes the Earth’s protective ozone layer.

California’s $1.6 billion strawberry industry will undoubtedly provide one of the biggest markets for the chemical, as will the Central Valley’s nut orchards and the fresh flower nurseries dotting the coast in Ventura and San Diego counties.

The pesticide is included on California’s official list of cancer-causing chemicals, and the department’s own scientific advisory panel has raised concerns that it could poison the air and water.

The agency tentatively approved its restricted use in April and Wednesday’s decision made it final.

Regulators insist the fumigant can be used safely and say permits will be required and strict guidelines will be followed.

“The process has been more complex because of methyl iodide’s toxicity as well as because of the intense public interest,” director Mary-Ann Warmerdam said. “Methyl iodide can be used safely under our tough restrictions by only highly trained applicators at times, places and specific conditions approved by the county agricultural commissioners.”

The new precautions — which include setting up buffer zones within which it can’t be applied and the use of special tarps to keep fumes from escaping the soil — go further than those imposed by the U.S. Environmental Protection Agency or by any other state, and will be in place later this month, Warmerdam said. Tests have found no traces of the carcinogen in fruit from treated soil.

Still, Assemblyman Bill Monning, D-Monterey, whose temperate coastal district produces strawberries year-round, said he was disturbed by the approval after several hearings on Sacramento about the pesticide’s health impacts.

“I think there is sufficient scientific evidence to say that this chemical is unsafe at any speed,” he said. “With a limited state budget, it is going to be very different to rely on agricultural commissioners to provide enough oversight and monitoring if this goes into use extensively.”

Methyl iodide was championed as a safe replacement for methyl bromide when the EPA approved it for use in 2007.

The pesticide is now registered in 47 other states. Current users include growers of tomatoes, peppers, eggplant and other crops in southeastern states.

Officials with Tokyo-based pesticide giant Arysta LifeScience Corp., which markets the product under the brand name Midas, said the approval will help California farmers stay in business even as the cost of farmland and labor keep rising.

“The end result is you’ve got good quality fruit and vegetables to consume, and you have an abundant supply at a cost that the consumer is interested in,” said Jeff Tweedy, head of business development in North America for Arysta LifeScience Corp., which makes the pesticide.

This week, a coalition of environmental and farmworker groups urged Gov.-elect Jerry Brown to reopen the decision immediately and ban methyl iodide in California once he is sworn in as governor Jan. 3.

Californians for Pesticide Reform, Pesticide Action Network North America, the California Rural Legal Assistance Foundation and the Center on Race, Poverty and the Environment made the request as part of a broader set of agricultural recommendations the group formally presented to the incoming administration this week.

Teresa DeAnda, a resident of the Central Valley town of Earlimart, the site of a major pesticide drift incident in which more than 250 people fell sick in 1999, said she was worried about the fumigant’s impact on rural communities.

“There is just no way you can prevent these accidents from happening,” said DeAnda, who represents Californians for Pesticide Reform. “It hurts my heart to know that people will be exposed when this pesticide is applied.”

In the strawberry fields of Ventura County, growers said the tight restrictions meant the fumigant wouldn’t be used widely. But they welcomed the opportunity to use a chemical that keeps soil free of a broad spectrum of bugs and weeds before planting.

“The industry wasn’t going to go under without it, but it’s important to keep these tools available,” said John Krist, CEO of the Ventura County Farm Bureau. “I appreciate people’s concerns about the health risk, but the mere fact that the chemical is toxic is not the issue. It’s ‘Can it be used in a safe manner with these restrictions?'”

– Genetic Apocalypse: The Genetic Integrity of The Human Race is Collapsing

– And Now: One Of The World’s Most Dangerous Chemicals As Pesticide In Strawberry Fields