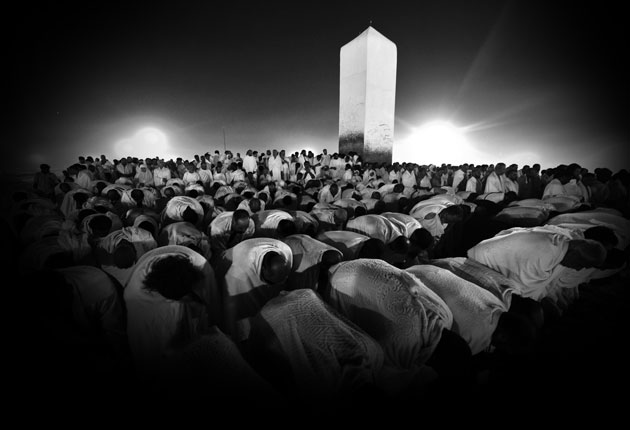 Muslim pilgrims pray at Mount Arafat, near the Saudi holy city of Mecca

I came to the latest uproarious US diplomatic history with the deepest cynicism. And yesterday, in the dust of post-election Cairo – the Egyptian parliamentary poll was as usual a mixture of farce and fraud, which is at least better than shock and awe – I ploughed through so many thousands of American diplomatic reports with something approaching utter hopelessness. After all, they do quote President Hosni Mubarak as saying that “you can forget about democracy,” don’t they?

It’s not that US diplomats don’t understand the Middle East; it’s just that they’ve lost all sight of injustice. Vast amounts of diplomatic literature prove that the mainstay of Washington’s Middle East policy is alignment with Israel, that its principal aim is to encourage the Arabs to join the American-Israeli alliance against Iran, that the compass point of US policy over years and years is the need to tame/bully/crush/oppress/ ultimately destroy the power of Iran.

There is virtually no talk (so far, at least) of illegal Jewish colonial settlements on the West Bank, of Israeli “outposts”, of extremist Israeli “settlers” whose homes now smallpox the occupied Palestinian West Bank – of the vast illegal system of land theft which lies at the heart of the Israeli-Palestinian war. And incredibly, all kinds of worthy US diplomats grovel and kneel before Israel’s demands – many of them apparently fervent supporters of Israel – as Mossad bosses and Israel military intelligence agents read their wish-list to their benefactors.

There’s a wonderful moment in the cables when the Israeli Prime Minister, Benjamin Netanyahu, explains to a US congressional delegation on 28 April last year that “a Palestinian state must be demilitarised, without control of its airspace and electro-magnetic field [sic], and without the power to enter into treaties or control its border”. Well goodbye, then, to the “viable” (ergo Lord Blair of Isfahan) Palestinian state we all supposedly want. And the US Congress lads and ladies appear to have said nothing.

Instead, in The New York Times, we read through the Wikileaks files for the best quote. Here is Saudi King Abdullah, via his ambassador in Washington (a dab hand with the press), sayingthat Abdullah believes America must “cut of the head of this snake” – the snake being Iran or Ahmadinejad or Iranian nuclear facilities, or whatever.

But the Saudis are always threatening to cut off the head of their latest snakes. In 1982, Yasser Arafat said he would cut off Israel’s left arm after its invasion of Lebanon, and then the Israeli Prime Minister Menachem Begin said he would cut off Arafat’s right arm. And I suppose that when it is revealed to us – as, alas, it is in these Wikileaks papers – that unsuitable applicants for US visas are called by American diplomats “visa vipers”, we can only conclude that snakes are much in demand.

The problem is that for decades, Middle East potentates have been threatening to chop off the heads of snakes, serpents, rats and Iranian insects – the latter a favourite of Saddam Hussein who used US-supplied “insecticide” to destroy them, as we all know – while Israeli leaders have called Palestinians “cockroaches” (Rafael Eitan), “crocodiles” (Ehud Barak) and “three-legged beasts” (Begin).

Tears of laughter, I have to admit, began to run down my face when I read the po-faced US diplomatic report from Bahrain that King Hamad – or “His Supreme Highness King Hamad” as he insists on being called, in his Sunni dictatorship with a Shia majority and a kingdom slightly larger than the Isle of Wight – had announced that the danger of letting the Iranian nuclear programme go on was “greater than the danger of stopping it”.

That wonderful Palestinian journalist Marwan Bishara was right when he said at the weekend that these US diplomatic papers were of more interest to anthropologists than political scientists; for they are a record of a deviant way of thinking about the Middle East. If King Abdullah (the crumbling Saudi version, as opposed to the Plucky Little Jordanian King version) really called Ahmadinejad Hitler and Sarkozy’s adviser called Iran “a fascist state”, it shows only that the US State Department is still obsessed with the Second World War.

I loved the stunning report of a visitor to the US embassy in Ankara who told diplomats that Iranian Supreme Leader Ali Khamenei was dying of leukemia. Not because the poor old boy is a cancer victim – he is not – but because this is the same old nonsense we’ve been peddled about the Middle East’s recalcitrant leaders for so many years. I remember the days when American or British “diplomatic sources” insisted that Gaddafi was dying of cancer, that Khomeini was dying of cancer (long before he died), that Khomeini was already dead of cancer – again, long before he died – that the Palestinian contract killer Abu Nidal was dying of cancer, 20 years before he was murdered by Saddam. Even in Northern Ireland, Britain’s half-baked spooks told us that the Protestant Vanguard leader William Craig was dying of cancer. And of course, he lived on, like the awful Gaddafi, whose Ukrainian nurse is described by the Americans as “voluptuous”. Of course she is. Aren’t all blonde dames “voluptuous” in such descriptions?

One of the most interesting reflections – dutifully ignored by most of the pro-Wikileaks papers yesterday – came in a cable on a meeting between a US Senate delegation and President Bashar Assad of Syria earlier this year. America, Assad told his guests, possessed “a huge information apparatus” but lacked the ability to analyse this information successfully. “While we lack your intelligence abilities,” he says in rather sinister fashion, “we succeed in fighting extremists because we have better analysts … in the US you like to shoot [terrorists]. Suffocating their networks is far more effective.” Iran, he concluded, was the most important country in the region, followed by Turkey and – number three – Syria itself. Poor old Israel didn’t get a look in.

Of course President Hamid Karzai of Afghanistan is “driven by paranoia” – so is everyone in that land, including most of Nato and especially theUnited States – and naturally the President of Yemen pretends to his own people that he is killing al-Qa’ida representatives when we all know it’s General David Petraeus’s warriors who are the culprits. Muslim leaders have constantly been claiming American military prowess against other Muslims as their own work.

Of course, we must not be too cynical. I loved the American diplomatic report (from Cairo, of course, not from Tel Aviv) which said that Netanyahu was “elegant and charming … but never keeps his promises”. But doesn’t that apply to half the Arab leaders as well?

And then we come to the dank and frightening reporting of a meeting between Andrew Shapiro, “Assistant Secretary of State for the US Political-Military Bureau”, meeting with Israel’s spooks almost exactly a year ago. Israel was unable to protect its Cessna Caravan and Raven unmanned pilotless drones over southern Lebanon, admits Mossad. (Hezbollah will be obliged for this nugget.) An Israeli “J5” Colonel Shimon Arad waffles on upon the dangers of “Hezbollahstan” and Hamastan” and the “internal political deadlock” in Lebanon – there wasn’t then, but there is now – and about Lebanon as a “volatile military arena” and the country’s “susceptibility to outside influences, including Syria, Iran and Saudi Arabia”.

And, of course – though Colonel Arad doesn’t mention this – American influence and Israeli influence and French influence and British influence and Turkish influence. Shapiro “cited the need to provide an alternative to Hezbollah” – the Costa Rican police force, perhaps? – and suggested that the Lebanese army would come to the defence of Hezbollah (unlikely, in the circumstances).

There’s a priceless denial of the UN Goldstone report on the Gaza atrocities of 2008-09 by reserve Major General Amos Gilad, who says that the document’s criticisms of Israel are “baseless” because the Israeli military made 300,000 phone calls to houses in Gaza ahead of strikes … to prevent civilian casualties”. Poor old Shapiro seems to have reacted in silence. That would be a phone call to a fifth of the entire Palestinian population of Gaza, kids, babies and all. And even then they killed 1,300 Palestinians, most of them civilians. Of course the Palestinian Authority of the bland Mahmoud Abbas didn’t want to take over this killing field after the Israelis had won – another offer made by Israel with US knowledge – because Israel didn’t win. It didn’t even find its missing soldier in the tunnels of Gaza.

There’s a symbolic moment when Sheikh Mohamed bin Zayed al-Nahyan of Abu Dhabi – not to be compared to the “distant and uncharismatic personage” of his brother Khalifa – worries about Iran in front of the US ambassador Richard Olsen who then suggests that he has “a strategic view of the region that is curiously close to the Israeli one”. But of course he does. Line them up. They will pray in their golden mosques, these kings and emirs and generals, buying more and more American weapons to protect themselves from the “Hitler” of Tehran – better, I suppose, than the 2003 Hitler of the Tigris or the 1956 Mussolini of the Nile – and entreat God that they will be saved by the might of America and Israel. I can’t wait for the next episode in this fantasy.