Here is just one simple example from my own practice:

It takes usually only 1 acupuncture treatment to ‘cure’ an acute tonsillitis (instead of ‘suppressing’ the infection with antibiotics), 3 treatments at the most. 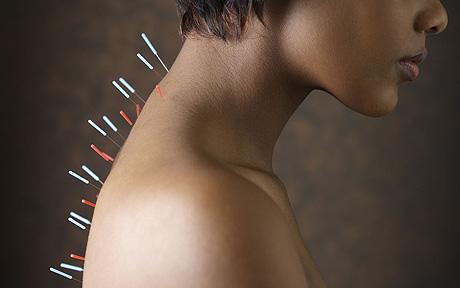 It limits activity in parts of the brain tasked with gauging pain, an experiment on 18 volunteers found.

Crucially, researchers believe the study shows that acupuncture does not only work on a psychological level – as a ‘placebo’ – but that is also has a direct ‘dampening’ effect on the brain’s pain processing centres.

Many critics believe acupuncture only works as a placebo.

The experiment, conducted by researchers at the Department of Complementary and Integrative Medicine at University of Duisburg-Essen in Germany, looked at brain scans of volunteers who were given mild electric shocks.

Researchers then compared MRI scan images – which can measure the small metabolic changes that take place in active parts of the brain – to see whether the responses differed.

Dr Nina Theysohn, who will present the research in Chicago on Tuesday at the annual meeting of the Radiological Society of North America, said: “Activation of brain areas involved in pain perception was significantly reduced or modulated under acupuncture.”

The scans also showed that acupuncture worked as a placebo, said the researchers, affecting activity in areas that govern expectation and comprehension of pain such as the anterior insula.

Dr Theysohn said: “Acupuncture is supposed to act through at least two mechanisms—nonspecific expectancy-based effects and specific modulation of the incoming pain signal.

“Our findings support that both these nonspecific and specific mechanisms exist, suggesting that acupuncture can help relieve pain.”

But Edzard Ernst, professor of complementary medicine at the Peninsula Medical School in Exeter, urged caution.

“We should remember, however, that we are currently not sure whether acupuncture does,in fact,reduce clinical pain.

“In my view, this is the more important question. If acupuncture does not have meaningfull clinical effects, its mechanism is hardly a relevant issue.”

Last year the National Institute for Clinical Excellence (Nice) appeared to endorse the traditional Chinese medicine, by announcing that doctors should “consider offering a course of up to 10 sessions of acupuncture over a period of up to 12 weeks” for cases of “non-specific” lower back pain.