Here is a flashback on ‘CO2’ first:

Watch an ‘Inconvenient Truth (Lie)’ again (What a horrible thought!) or watch the following  video from 2:20 and you will see that CO2 lags 800 years behind temperature rises:

And yes, the hockey stick graph is a fake and it is obvious to anybody: 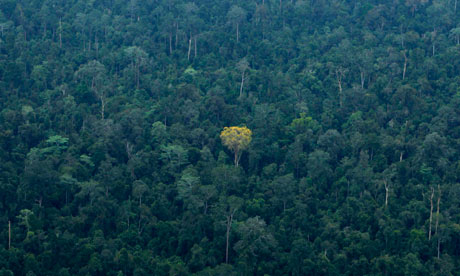 An aerial view of trees at a forest on Sumatra, Indonesia where millions are being spent to fight deforestation. Photograph: Beawiharta/Reuters

Some of the world’s largest oil, mining, car and gas corporations will make hundreds of millions of dollars from a UN-backed forest protection scheme, according to a new report from the Friends of the Earth International.

The group’s new report – launched on the first day of the global climate summit in Cancun, Mexico, where 193 countries hope to thrash out a new agreement – is the first major assessment of the several hundred, large-scale Redd (Reduced emissions from deforestation and degradation) pilot schemes. It shows that banks, airlines, charitable foundations, carbon traders, conservation groups, gas companies and palm plantation companies have also scrambled into forestry protection.

While forestry is billed as one issue where significant progress could be made at the talks, over the weekend David Cameron, Chris Huhne, the climate change secretary, and the government’s chief scientists all played down the prospect of a global deal to cut carbon emissions.

“British ministers are going to Mexico this week with an approach that is both realistic and optimistic,” the prime minister wrote in the Observer . “Realistic, because we don’t expect a global deal to be struck in Cancun, but optimistic too, because we are viewing this as a stepping stone to future agreement.”

Huhne, who will attend the second week of the talks, was more blunt: “No one expects a binding deal on climate change in Cancun.” But he said deforestation and longer-term climate finance were areas where progress could be made.

The Redd scheme is central to slowing, or halting, deforestation, which causes huge releases of carbon dioxide. But critics say that the scheme amounts to privatisation of natural resources.

FoE’s report shows, for example that the Anglo-Dutch oil firm Shell has linked with Russian gas giant Gazprom and the Clinton Foundation to invest in the Rimba Rey project, 100,000ha of peat swamp in Indonesia. The project is expecting to prevent 75m tonnes of carbon being emitted over 30 years, which could earn the three groups $750m at a modest carbon price of $10 a tonne.

It also says that an investment of little more than $10m by the bank Merrill Lynch, the conservation group Flora and Fauna International and an Australian carbon trading company could generate more than $430m, over 30 years, from a project to protect 750,000ha of forest in Aceh province, Indonesia.

The “Redd rush” is limited to voluntary carbon offsets for now but is expected to become a stampede if the 193 countries meeting this week reach an outline forestry protection agreement that would allow governments to offset national emissions against forest conservation. It could result in eventual cash flows of $30bn a year from rich countries – who need to offset emissions – to poor countries, where most of the world’s endangered forests are.

But the report’s authors say great social risks attached to the schemes must be addressed. “There are significant risks that Redd will lead to the privatisation of the world’s forests, transferring them out of the hands of indigenous peoples and local communities and into the hands of bankers and carbon traders,” they say.

Many of the world’s greatest stretches of forests are the traditional home of indigenous peoples, and millions of others may be dependent on access to forests, say the authors, who urge that ownership of land and carbon rights must be resolved. “Many Redd-related disputes are now unfolding. Respect for indigenous peoples’ rights seems to be a missing element,” says the report. “A Redd race is under way. Redd is emerging as a mechanism that has the potential to exacerbate inequality, reaping huge rewards for corporate investors whilst bringing considerably fewer benefits or even serious disadvantages to forest dependent communities. It could become a dangerous distraction from the business of implementing real climate change cuts.”

One major concern is that the weak legal definitions of “forest” and “degraded land” would let the powerful logging and palm companies carry on business as usual by persuading governments to redefine what constitutes a forests.

Greenpeace claimed last week that Indonesia planned to class large areas of its remaining natural forests as “degraded land” in order to cut them down and receive $1bn of climate aid for replanting them with palm trees and biofuel crops.

However some observers, including Lord Stern, say the Redd schemes offer the best opportunity for cost-effective and immediate reductions in greenhouse gas emissions. They say thatmore technologically sophisticated options, such as carbon capture and storage, could take several years to come into large-scale operation, and they are more expensive.

A spokesperson for Shell said the company could not yet comment on the Friends of the Earth report.

1 thought on “Who Will Profit From The UN Forest Protection Scheme? Big Oil Companies And The Banksters”