“Small businesses and families are tightening their belts,” Obama said in brief remarks at the White House. “The government should, too.”

– Robert Fisk: An American $3 Billion Bribe to Israel That Stinks of Appeasement 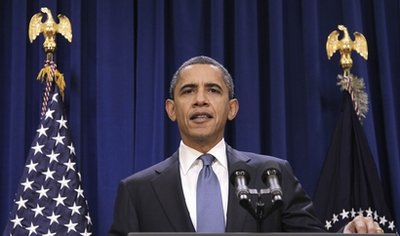 President Barack Obama delivers a statement to members of the media in the in the Old Executive Office Building, on the White House campus in Washington, Monday, Nov. 29, 2010.

WASHINGTON – President Barack Obama on Monday proposed a two-year freeze of the salaries of some 2 million federal workers, trying to seize the deficit-cutting initiative from Republicans with a sudden, dramatic stroke. Though signaling White House concern over record deficits, the freeze would make only a tiny dent in annual deficits or the nation’s $14 trillion debt.

“Small businesses and families are tightening their belts,” Obama said in brief remarks at the White House. “The government should, too.” The administration said the plan was designed to save more than $5 billion over the first two years.

The proposal, which must be approved by Congress, would not apply to the military, but it would affect all others on the Executive Branch payroll. It would not affect members of Congress or their staffs, defense contractors, postal workers or federal court judges and workers.

Obama’s move was an attempt to get in front of Republican plans to slash federal pay and the workforce next year, when they will flex more legislative muscle than now. It came a day ahead of Obama’s meeting at the White House with both Republicans and Democratic leaders — his first with Republicans since the midterm elections — and two days before the deadline for recommendations by his deficit-reduction commission.

The president said the economy and federal spending were at the top of the agenda for Tuesday’s meeting, one he said he hoped “will mark a first step towards a new and productive working relationship” between the two parties. Because of GOP midterm gains, “we now have a shared responsibility to deliver for the American people on the issues that define not only these times but our future,” Obama said.

House Republican leader John Boehner of Ohio, on track to become House speaker in January, said he was pleased with the president’s announcement.

“Republicans and Democrats don’t have to wait until January to cut spending and stop all the tax hikes. We can — and should — start right now,” Boehner said in a statement. He also suggested that Obama was taking a page from the GOP playbook.

The freeze would take effect on Jan. 1, assuming the lame-duck Congress approves the move by the end of this year. The 2012 pay freeze will be included by Obama as part of his fiscal 2012 budget submission to Congress, due early next year.

In the past, Congress has generally gone along with presidential recommendations on federal worker pay levels.

Without congressional action, federal employees would automatically get a 0.9 percent increase under the formula set by a 1990 law. They received a 1.9 percent pay increase this year.

Rep. Darrell Issa, R-Calif., in line to be the next chairman of the House committee that oversees federal personnel issues, called Obama’s federal salary freeze “long overdue.” But labor union leaders balked at it.

John Gage, president of the 600,000-member American Federation of Government Employees, called the decision “a slap at working people. … To symbolically hit at federal employees I think is just wrong.” He said the move would not really save as much as the White House claims because federal employees often get just a fraction of projected raises.

Colleen Kelley, head of the 150,000-member National Treasury Employees Union, said union officials would try to derail the proposal in Congress. She may find some sympathy with union-friendly Democrats still in control for another month.

“We’re going to do everything we can to make this not happen and to explore all our options,” Kelley said.

The president’s move bows to growing budget concerns and pressure from Republicans, and many rank-and-file Democrats, to rein in federal pay and benefits.

The federal government is the nation’s largest employer, with about 2 million workers. About 85 percent of them work outside of the Washington, D.C., area.

“Meaningful deficit deduction cannot be achieved through a piecemeal approach to trimming federal spending,” Hoyer said. Active members of the military “serving in harm’s way” should be exempt, he said, but he questioned the wisdom of leaving out military members in noncombat roles while subjecting their civilian counterparts to the freeze.

“I did not reach this decision easily, this is not a line item on a federal ledger, these are people’s lives,” Obama said.

But, he added, “getting this deficit under control is going to require some broad sacrifice, and that sacrifice must be shared by the employees of the federal government.” He said he was just asking civil servants “to do what they’ve always done — play their part.”

Federal workers are an easy target. Polls show rising public anger toward the federal government at a time of high continued unemployment and Wall Street and auto bailouts.

Federal workers have been less directly affected by the recession than other sectors, with fewer layoffs and continued annual pay increases. Republican and fiscal conservative critics have argued that federal employees are better paid than private-sector counterparts, although public workers’ unions dispute this.

Congress, not covered by Obama’s new freeze plans as separate branch of government, froze its pay last April, with House and Senate votes to forgo an automatic $1,600 annual cost of living increase.

The co-chairmen of Obama’s bipartisan deficit commission, Republican Alan Simpson and Democrat Erskine Bowles, have proposed a three-year freeze in pay for most federal employees as part of their plan to reduce the nation’s growing deficit.

The federal government is on track to rack up the third trillion-dollar-plus deficit in history. Yearly deficits have ballooned primarily as a result of falling tax revenues and rising recession-related costs. Last year’s deficit totaled $1.3 trillion, second highest in history, down from the all-time record of $1.4 trillion set in 2009. The government’s budget year begins on Oct. 1 and ends on Sept. 30.

The national debt — the total amount owed by the government, essentially the sum of previous budget deficits — stands at $13.8 trillion.

Obama indicated there were other belt-tightening steps ahead. “We’re going to have to make some additional very tough decisions that this town has put off for a very long time,” he said. At the same time, noting continued economic weakness, Obama said, “We can’t put the brakes on too quickly” because of the still-fragile economy.

Jeffrey Zients, deputy White House budget director, told reporters the two-year freeze on Executive Branch civilian workers was “the first of many difficult steps ahead that we’ll be taking in the upcoming budget to put our nation on sound fiscal footing, steps that will ask for all of us to sacrifice.”