He said the country is approaching “a critical point” due to it high debt load and weak growth and there were ample funds to shore up Portugal, one of the eurozone’s smaller countries which contributes less than 2pc to the 16-nation bloc’s gross domestic product. 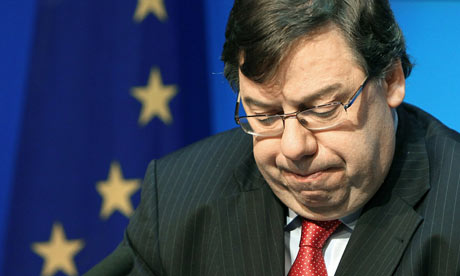 Stocks fell on both sides of the Atlantic, the euro tumbled, and the cost of borrowing for Ireland, Spain and Portugal jumped today, as details of the republic’s €85bn (£72bn) bailout failed to quell anxiety that the crisis in the eurozone was deepening.

Amid speculation that the European authorities may be left with little option but to embark on large-scale quantitative easing to try to bolster sentiment, Ireland’s borrowing costs shot as high as 9.6% as the terms of its bailout by the International Monetary Fund and European Union were digested by investors.

“The bottom line is that the financial markets are unimpressed, and that’s the most generous description,” Neil MacKinnon, global macro strategist at VTB Capital told Associated Press. “The crisis rumbles on.”

Only two shares in the FTSE 100, Barclays and HSBC, ended the day in positive territory as the blue-chip index closed below 5600 for the first time since 1 October, down 2% at 5550.

The Dow Jones industrial average fell 39.51 points to 11,052.49, and the euro slid to a new two-month low against the dollar of $1.3065 amid concerns about the long-term future of the decade-old single currency.

The cost of borrowing for the peripheral eurozone countries stayed stubbornly high, with Portugual above 7% and Spain above 5%, as speculation focused on the next indebted country which might need financial help. Italy endured its biggest one day rise in borrowing costs for a decade.

The cost of insuring Portuguese debt against default rose to a record high after Nouriel Roubini, economics professor and chairman of Roubini Global Economics, urged Lisbon to take international assistance. “Like it or not, Portugal is reaching the critical point,” Roubini told the Portuguese newspaper Diário Económico. “Perhaps it could be a good idea to ask for a bailout in a preventative manner.”

Ireland’s bailout failed to dent fears of contagion across the eurozone despite rallying cries by France’s economy minister Christine Lagarde and Germany’s finance minister Wolfgang Schäuble, who both insisted Portugal would not need help. Andrew Lim, head of financials research at Matrix investment bank, said: “The Irish bailout doesn’t solve the euro problem … We are looking at Portugal, then Spain next.”

The fragility in the markets led to speculation that the European Central Bank will delay attempts to begin withdrawing funds for banks at its meeting on Thursday, even though the €35bn earmarked for Ireland’s banks was intended to wean them off the ECB’s life support.

Analysts said although the Ireland bailout had been accompanied by plans for new ways to rescue troubled eurozone countries after 2013, when the current emergency schemes run out, investors had been left confused. It was still not clear in what circumstances bondholders would be expected to share the losses of countries that were allowed to reschedule their debt after 2013 – in effect defaulting.

“Given the lack of clarity about what constitutes the appearance of insolvency, and what type of restructuring might occur in such a case, markets are likely to remain wary of holding government debt issued by other troubled eurozone countries like Portugal and Spain,” said Ben May, European economist at Capital Economics.

“With huge political frictions still clearly in place within the region, fears of a future break-up of the region look set to remain, placing further downward pressure on the euro.”

The bailout for Ireland is intended to ensure that neither the country nor its banks will default on their debt. The decision by the authorities to ensure that the possibility of default was reduced was initially welcomed. Gary Jenkins, head of fixed income research at Evolution Securities, said: “This is not the time to inject panic into the banking sector.”

Greece, the first eurozone country to be bailed out, was today given until 2021 to repay its €110bn loan from the IMF and EU, rather than 2015.

Greece’s finance minister George Papaconstantinou said: “We have a grace period of four years and a repayment period of seven years.

“The decision is very important, it opens the way to return to markets earlier than expected.”