Read the full coverage of the US embassy cables 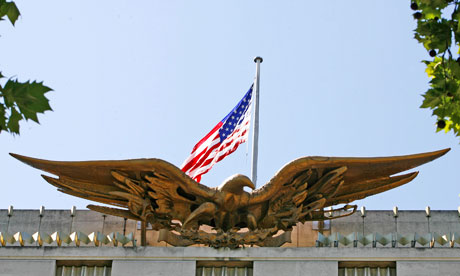 The United States was catapulted into a worldwide diplomatic crisis today, with the leaking to the Guardian and other international media of more than 250,000 classified cables from its embassies, many sent as recently as February this year.

At the start of a series of daily extracts from the US embassy cables – many designated “secret” – the Guardian can disclose that Arab leaders are privately urging an air strike on Iran and that US officials have been instructed to spy on the UN leadership.

These two revelations alone would be likely to reverberate around the world. But the secret dispatches, which were obtained by WikiLeaks, the whistleblowers’ website, also reveal Washington’s evaluation of many other highly sensitive international issues.

These include a shift in relations between China and North Korea, high-level concerns over Pakistan’s growing instability, and details of clandestine US efforts to combat al-Qaida in Yemen.

Among scores of disclosures that are likely to cause uproar, the cables detail:

• Grave fears in Washington and London over the security of Pakistan’s nuclear weapons programme, with officials warning that as the country faces economic collapse, government employees could smuggle out enough nuclear material for terrorists to build a bomb.

• Inappropriate remarks by Prince Andrew about a UK law enforcement agency and a foreign country.

• Suspicions of corruption in the Afghan government, with one cable alleging that vice-president Zia Massoud was carrying $52m in cash when he was stopped during a visit to the United Arab Emirates. Massoud denies taking money out of Afghanistan.

• How the hacker attacks which forced Google to quit China in January were orchestrated by a senior member of the Politburo who typed his own name into the global version of the search engine and found articles criticising him personally.

• Allegations that Russia and its intelligence agencies are using mafia bosses to carry out criminal operations, with one cable reporting that the relationship is so close that the country has become a “virtual mafia state”.

• The extraordinarily close relationship between Vladimir Putin, the Russian prime minister, and Silvio Berlusconi, the Italian prime minister, which is causing intense US suspicion. Cables detail allegations of “lavish gifts”, lucrative energy contracts and the use by Berlusconi of a “shadowy” Russian-speaking Italiango-between.

• Devastating criticism of the UK’s military operations in Afghanistan by US commanders, the Afghan president and local officials in Helmand. The dispatches reveal particular contempt for the failure to impose security around Sangin – the town which has claimed more British lives than any other in the country.

The US has particularly intimate dealings with Britain, and some of the dispatches from the London embassy in Grosvenor Square will make uncomfortable reading in Whitehall and Westminster. They range from political criticisms of David Cameron to requests for specific intelligence about individual MPs.

The cables contain specific allegations of corruption, as well as harsh criticism by US embassy staff of their host governments, from Caribbean islands to China and Russia. The material includes a reference to Putin as an “alpha-dog” and Hamid Karzai as being “driven by paranoia”, while Angela Merkel allegedly “avoids risk and is rarely creative”. There is also a comparison between Mahmoud Ahmadinejad and Adolf Hitler.

The cables names Saudi donors as the biggest financiers of terror groups, and provide an extraordinarily detailed account of an agreement between Washington and Yemen to cover up the use of US planes to bomb al-Qaida targets. One cable records that during a meeting in January with General David Petraeus, then US commander in the Middle East, Yemeni president Abdullah Saleh said: “We’ll continue saying they are our bombs, not yours.”

Other revelations include a description of a near “environmental disaster” last year over a rogue shipment of enriched uranium, technical details of secret US-Russian nuclear missile negotiations in Geneva, and a profile of Libya’s Muammar Gaddafi, who they say is accompanied everywhere by a “voluptuous blonde” Ukrainian nurse.

US ambassadors in other capitals were instructed to brief their hosts in advance of the release of unflattering pen-portraits or nakedly frank accounts of transactions with the US which they had thought would be kept quiet. Washington now faces a difficult task in convincing contacts around the world that any future conversations will remain confidential.

As the cables were published, the White House released a statement condemning their release. “Such disclosures put at risk our diplomats, intelligence professionals, and people around the world who come to the US for assistance in promoting democracy and open government. By releasing stolen and classified documents, WikiLeaks has put at risk not only the cause of human rights but also the lives and work of these individuals.”

In London, a Foreign Office spokesman said: “We condemn any unauthorised release of this classified information, just as we condemn leaks of classified material in the UK. They can damage national security, are not in the national interest and, as the US have said, may put lives at risk. We have a very strong relationship with the US government. That will continue.”

The US ambassador to Britain, Louis Susman, said: “We have briefed the UK government and other friends and allies around the world about the potential impact of these disclosures … I am confident that our uniquely productive relationship with the United Kingdom will remain close and strong, focused on promoting our shared objectives and values.”

Sir Christopher Meyer, who was British ambassador to the US in the Blair years, thought the leaks would have little impact on diplomatic behaviour. “This won’t restrain dips’ [diplomats’] candour,” he said. “But people will be looking at the security of electronic communications and archives. Paper would have been impossible to steal in these quantities.”

The state department’s legal adviser has written to the founder of WikiLeaks, Julian Assange and his London lawyer, warning that the cables were obtained illegally and that the publication would place at risk “the lives of countless innocent individuals … ongoing military operations … and co-operation between countries”.

The electronic archive of embassy dispatches from around the world was allegedly downloaded by a US soldier earlier this year and passed to WikiLeaks. Assange made it available to the Guardian and four other news organisations: the New York Times, Der Spiegel in Germany, Le Monde in France and El País in Spain. All five plan to publish extracts from the most significant cables, but have decided neither to “dump” the entire dataset into the public domain, nor to publish names that would endanger innocent individuals. WikiLeaks says that, contrary to the state department’s fears, it also initially intends to post only limited cable extracts, and to redact identities.

The cables published today reveal how the US uses its embassies as part of a global espionage network, with diplomats tasked to obtain not just information from the people they meet, but personal details, such as frequent flyer numbers, credit card details and even DNA material.

The most controversial target was the UN leadership. That directive requested the specification of telecoms and IT systems used by top officials and their staff and details of “private VIP networks used for official communication, to include upgrades, security measures, passwords, personal encryption keys”.

PJ Crowley, the state department spokesman in Washington, said: “Let me assure you: our diplomats are just that, diplomats. They do not engage in intelligence activities. They represent our country around the world, maintain open and transparent contact with other governments as well as public and private figures, and report home. That’s what diplomats have done for hundreds of years.”

The acting deputy spokesman for Ban Ki-moon, Farhan Haq, said the UN chief had no immediate comment. “We are aware of the reports.”

The dispatches also shed light on older diplomatic issues. One cable, for example, reveals, that Nelson Mandela was “furious” when a top adviser stopped him meeting Margaret Thatcher shortly after his release from prison to explain why the ANC objected to her policy of “constructive engagement” with the apartheid regime.

“We understand Mandela was keen for a Thatcher meeting but that [appointments secretary Zwelakhe] Sisulu argued successfully against it,” according to the cable. It continues: “Mandela has on several occasions expressed his eagerness for an early meeting with Thatcher to express the ANC’s objections to her policy. We were consequently surprised when the meeting didn’t materialise on his mid-April visit to London and suspected that ANC hardliners had nixed Mandela’s plans.”

The US embassy cables are marked “Sipdis” – secret internet protocol distribution. They were compiled as part of a programme under which selected dispatches, considered moderately secret but suitable for sharing with other agencies, would be automatically loaded on to secure embassy websites, and linked with the military’s Siprnet internet system.

They are classified at various levels up to “secret noforn” [no foreigners]. More than 11,000 are marked secret, while around 9,000 of the cables are marked noforn.

More than 3 million US government personnel and soldiers, many extremely junior, are cleared to have potential access to this material, even though the cables contain the identities of foreign informants, often sensitive contacts in dictatorial regimes. Some are marked “protect” or “strictly protect”.

Last spring, 22-year-old intelligence analyst Bradley Manning was charged with leaking many of these cables, along with a gun-camera video of an Apache helicopter crew mistakenly killing two Reuters news agency employees in Baghdad in 2007, which was subsequently posted by WikiLeaks. Manning is facing a courtmartial.

In July and October WikiLeaks also published thousands of leaked military reports from Afghanistan and Iraq. These were made available for analysis beforehand to the Guardian, along with Der Spiegel and the New York Times.

A former hacker, Adrian Lamo, who reported Manning to the US authorities, said the soldier had told him in chat messages that the cables revealed “how the first world exploits the third, in detail”.

He also said, according to Lamo, that Clinton “and several thousand diplomats around the world are going to have a heart attack when they wake up one morning and find an entire repository of classified foreign policy is available in searchable format to the public … Everywhere there’s a US post … there’s a diplomatic scandal that will be revealed”.

Asked why such sensitive material was posted on a network accessible to thousands of government employees, the state department spokesman told the Guardian: “The 9/11 attacks and their aftermath revealed gaps in intra-governmental information sharing. Since the attacks of 9/11, the US government has taken significant steps to facilitate information sharing. These efforts were focused on giving diplomatic, military, law enforcement and intelligence specialists quicker and easier access to more data to more effectively do their jobs.”

He added: “We have been taking aggressive action in recent weeks and months to enhance the security of our systems and to prevent the leak of information.”