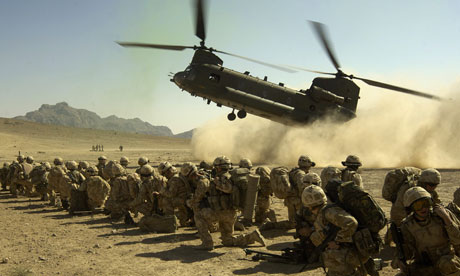 The leak is expected to be co-ordinated by the WikiLeaks website, which has previously published secret details of military operations in Iraq and Afghanistan. Photograph: Sean Clee/Royal Navy/EPA

David Cameron and other world leaders were being briefed by the US state department about what American diplomats fear will be contained in the expected leak of thousands of sensitive diplomatic cables sent to Washington by US ambassadors around the world.

The leak is expected to be co-ordinated by the WikiLeaks website, which has previously published secret details of military operations in Iraq and Afghanistan.

Newspaper editors were today asked to brief the government if they plan to publish sensitive diplomatic files. But Downing Street stressed that the DA (defence advisory) did not mean court action was likely to suppress publication of the documents. The issue of the so-called D-notice is supposed to be a reminder that newspapers should be concerned for UK military operations.

US officials, including the secretary of state, Hillary Clinton, have been trying to brief allies, including Cameron, on what they expect to be in the documents.

The head of the US military, Admiral Mike Mullen, called on WikiLeaks to stop the publication of the documents. “I would hope that those who are responsible for this would, at some point in time, think about the responsibility that they have for lives that they’re exposing and the potential that’s there, and stop leaking this information,” he told CNN in an interview to be broadcast on Sunday.

A spokesman for Cameron declined to discuss the nature of any confidential communications that might have been obtained by WikiLeaks. It is thought that the American ambassador to the UK, Louis Susman, has been trawling files to guess what might have been leaked.

A Downing Street spokesman said: “Obviously, the government has been briefed by US officials, by the US ambassador, as to the likely content of these leaks. I don’t want to speculate about precisely what is going to be leaked before it is leaked.”

Alan Rusbridger, editor of the Guardian, said tonight: “I appreciate why the DA notice might make people anxious. But, from my reading of the WikiLeaks material, only a tiny part of it is covered or relevant.”

Before the notice was released, a spokesman for the US state department, PJ Crowley, warned that publication could erode trust in the US as a diplomatic partner. “When this confidence is betrayed and ends up on the front pages of newspapers or lead stories on television or radio, it has an impact. We wish this would not happen, but we are obviously prepared for the possibility that it will.”

The main American concern is that the diplomatic cables will reveal either damaging episodes or duplicity by the Americans that will undermine trust in the good faith of the US. Diplomats are expected to produce unvarnished accounts of the state of the political leaders and the balance of forces, as well as to disclose any form of intelligence activity.

The Obama administration today warned that the WikiLeaks release would endanger “lives and interests”.

Italy’s foreign minister, Franco Frattini, said he spoke with the state department on Friday, which told him that there would be documents regarding Italy in the leak, “but the content can’t be anticipated”.

“We’re talking about thousands and thousands of classified documents that the US will not comment on, as is their custom,” Frattini said.

He claimed to have been told that the person responsible for the leaks had been arrested.

The governments of Canada, Israel, Iraq and Norway also said they had been briefed by US officials.

The US says it has known for some time that WikiLeaks held the diplomatic cables.