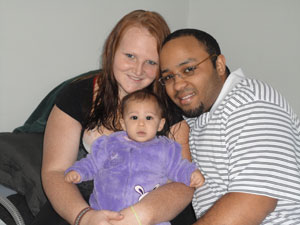 The ACLU of Pennsylvania recently filed a civil rights lawsuit on behalf of a couple whose newborn baby was kidnapped by Lawrence County Children and Youth Services (LCCYS) because her mother recklessly consumed an “everything” bagel from Dunkin’ Donuts the day before the birth.

Jameson Hospital, where Isabella Rodriguez was born on April 27, has a policy of testing expectant mothers’ urine for illegal drugs and reporting positive results to LCCYS, even without any additional evidence that the baby is in danger of neglect or abuse.

LCCYS, in turn, has a policy of seizing such babies from their homes based on nothing more than the test result. Unfortunately for Isabella’s parents, Elizabeth Mort and Alex Rodriguez, Jameson sets the cutoff level for its opiate test so low that it can be triggered by poppy seeds, which is why two caseworkers and two Neshannock Township police officers visited their home the day after baby and mother returned from the hospital.

LCCYS seized the three-day-old girl and put her in foster care for five days before conceding it had made a mistake.

In their complaint (PDF), Mort and Rodriguez say the “seize first, ask questions later” policy jointly implemented by Lawrence County and the Jameson Health System (motto: “there’s no place like home”) is not required by state or federal law and represents a conspiracy to deprive parents of their 14th Amendment rights.

In addition to seeking “nominal, compensatory, and punitive damages,” they are asking the U.S. District Court for the Western District of Pennsylvania to declare the policy unconstitutional.

The recklessness and indifference displayed by both the county and the hospital, neither of which made any attempt to corroborate suspicions that the baby might be in danger, is astonishing.

According to the complaint, Mort’s obstetrician, Nicole Carlson, “did not inform Plaintiff Mort of the positive UDS [urine drug screen] because, in her experience, many of the initial UDS tests come back as ‘false positives.’

The hospital and LCCYS nevertheless mindlessly proceeded to separate Isabella from her parents, based on nothing more than a “zero tolerance for poppy seeds” rule of their own invention.

More information about the case here.

1 thought on “Eat a Bagel, Lose Your Baby”