Criminals of the worst kind!

Alternative medicine can heal both dengue fever and malaria. 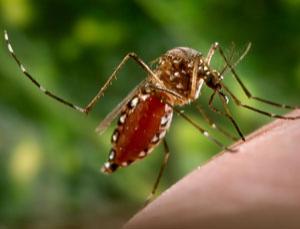 No offspring for you (Image: CDC/Phanie/Rex Features)

An outdoor trial of mosquitoes genetically engineered to sabotage Aedes aegypti mosquitoes, which spread dengue fever, has been declared a success by scientists in the field.

The trial is first time genetically modified mosquitoes have been released in the wild. The strategy promises to provide a new weapon against dengue, a disease that infects 50 million people annually and kills 25,000. In the past year, dengue has reappeared in the US for the first time in 65 years, and in southern Europe.

By the end of the six-month trial on a 16-hectare plot, populations of the native insects, which spread the dengue virus had plummeted.

“It’s a proof of principle, that it works,” says Angela Harris of the Mosquito Control and Research Unit on the Caribbean island of Grand Cayman, where the trial took place. The MCRU conducted the trial with Oxitec, the company in Oxford, UK, that bred the GM mosquitoes.

The only current method of combating dengue is to kill and control the mosquitoes that pick up and spread the virus when they feed on blood from infected individuals. “There’s no vaccine, no preventative drugs as there are with malaria, and no therapeutic drugs,” says Luke Alphey, the chief scientist and founder of Oxitec.

The only control measures are therefore to kill the mosquitoes with insecticides or monitor and restrict the small pools of water, saucers and receptacles where they breed. “The range of options really is extremely limited,” says Alphey, adding that the disease poses a threat to 40 per cent of the world’s population.

Oxitec breeds millions of males carrying an altered gene called tTA which they pass down when they mate with females. The lethal gene overcommits the gene-reading machinery of larva and pupae, preventing them from growing properly and causing them to die before adulthood, breaking the insects’ life cycle.

In the six months of the trial, the researchers released males in batches of 50,000. A total of 3.3 million were released.

“Males don’t bite, so no one gets sick,” says Harris.

The researchers measured depletion of the population through weekly checks on eggs laid by the females in jam-jar-sized pots that were randomly dispersed throughout the trial plot. For the first three months or so, the proportion of pots containing at least one egg gradually rose, reaching a peak of more than 60 per cent But by the end of the experiment the proportion had fallen to 10 per cent.

The researchers conclude that the number of females laying eggs nosedived because most were dying as larvae. The resources consumed by the doomed larvae and pupae before they die vie with normal rivals for resources, which helps to reduce the population.

Since the trial ended a month ago, Harris and her colleagues have been monitoring the site to see how long it takes for the population to recover. They hope to establish how many males need to be released, for how long, and where in order to effectively suppress natural populations.

Alphey says that the Cayman trial was intended purely to prove that the strategy works. Oxitec now plans to use the GM males in conjunction with normal control methods to combat the mosquitoes.

Oxitec has already conducted indoor trials in Malaysia, and has approval to conduct contained trials in many other dengue-affected countries, including Brazil, France, India, the US, Thailand, Singapore and Vietnam.

Alphey say he is confident he can convince even those who are generally sceptical of genetic modification to support the strategy as a mean of saving lives and preventing sickness. He argues that the GM mosquitoes will not spiral out of control in the environment because their offspring do not live long enough to reproduce.

In Australia, researchers are planning a different approach against dengue, using GM mosquitoes carrying bacteria that sabotage breeding success. Projects are also under way to develop GM mosquitoes to combat the spread of malaria.