Nearly one in five Americans have said that there had been times over the past year when they could not afford to put food on the table, despite record participation in a food stamp scheme. 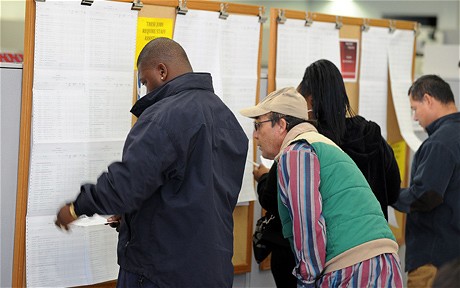 People look at job listings at a government-run employment center in Las Vegas. One in five say they have struggled to put food on the table in the past year Photo: AFP

The number was only marginally lower than in September 2009, when record numbers said they were reliant on government-provided food, according to research by Gallup.

The new figures have raised objections to plans in Congress to end increased funding provided to the scheme by the Recovery Act, which was passed in early 2009 when the economic crisis started to affect families heavily.

Moves under consideration would take an estimated $59 (£37) a month worth of food from low-income families.

Jim Weill, president of the Food Research and Action Centre, said that he was concerned that when Republicans assume control of the House of Representatives in January they will be more reluctant to spend money on food stamps.

“Food insecurity is very widespread in this country – it’s not a phenomenon of just poor districts or inner-city districts,” Mr Weill said.