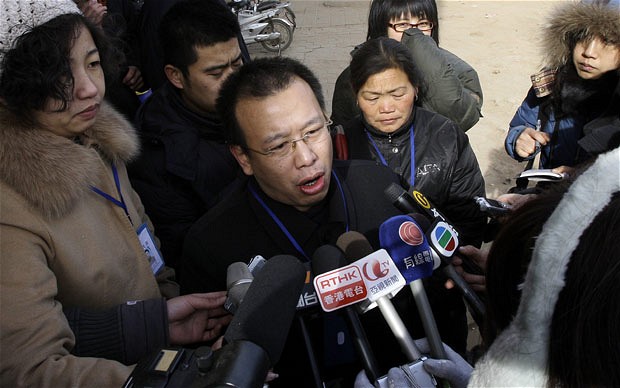 A man whose five-year-old son was poisoned during China’s toxic milk crisis has been jailed for two-and-a-half years after he set up a website to warn other parents about the disease.

Zhao Lianhai, a 38-year-old former employee of China’s Food Quality and Safety authority, created the site in 2009 after more than 300,000 Chinese toddlers were poisoned, and at least six killed, by milk that was laced with melamine, an industrial chemical that made the milk appear more wholesome.

The website quickly became a focal point for thousands of parents who were outraged at the crisis, and that the issue had initially been covered up.

The verdict comes as David Cameron prepares to deliver a speech in Beijing in which he will set out the value of a free and fair democracy. The Prime Minister, leading the biggest British delegation to China for 200 years, has come under intense pressure not to ignore human rights abuses in order to secure business deals in the world’s most dynamic economy.

Leading artists and dissident Ai WeiWei yesterday warned that Mr Cameron would be “committing a crime” if he failed to address the issue.

However the authorities have made no attempt to relax their stance on dissent during the British visit. Mr Zhao is the second high-profile campaigner targeted in as many days after Mo Shaoping, lawyer for Nobel prize winning Chinese dissident Liu Xiaobo, was prevented from boarding a plane to London.

Mr Zhao told The Daily Telegraph that he was determined to spread information about melamine-poisoning so that parents in the Chinese countryside, who lived far away from hospitals, would be spurred to seek treatment for their children.

He said his own son, Pengrui, had shown no symptoms prior to being diagnosed with a kidney stone. “That is what worries me, because a lot of parents might not realise their kids have a problem, and then the problem could get serious,” he said.

However, as more and more parents began to call for justice and compensation, and Mr Zhao began to press their case publicly, he came to the attention of the Chinese authorities.

Last November, he was arrested by the police and then charged in March with “creating a disturbance”. His lawyer, Li Fangping, said the evidence for the charge had been that Mr Zhao had given a media interview on a public pavement, held a dinner in a restaurant for a dozen parents of other victims, and that he had held up a small sign in protest outside a trial of milk company executives responsible for the poisoning.

The sentence against Mr Zhao was delivered as Mr Cameron met with Hu Jintao, the Chinese president. Mr Cameron is reported to have raised human rights issues with Wen Jiabao, the Chinese prime minister, yesterday, but Mr Zhao’s case is another indication of the scant regard that the Chinese government has for outside opinions on its civil liberties. British officials in Beijing had no immediate comment on the case.

As his sentence was announced, Mr Zhao protested in court, stripping off his prisoner’s uniform and refusing to be handcuffed. “I am not guilty!” he said. Mr Li said he would appeal the sentence, and that Mr Zhao was in “quite good health, but anxious. He has not seen his wife and two children for almost a year.”

Mr Li expected the sentence, saying before the verdict that there was a “zero chance” of a not guilty verdict. He added that the case had been politically-motivated. “The judge told us, when we spoke to him, that he could not decide the case, but had to wait for instructions from his higher-ups.”

Mr Zhao’s wife, Li Xuemei, said she was not working, but that the family was surviving on hand-outs from their friends.

“Our parents are also in good health and often come to help me take care of the kids,” she said. “Our son is now almost six and is in pre-school. I was prepared for the worst, and I can put up with the verdict. At least it ends the heart-burning anxiety we felt while we were waiting for a decision,” she added.

Mr Zhao has already served one year of his sentence, and will now have another year-and-a-half of prison time.

Three people have been sentenced to death for their role in the toxic milk case, and the general manager and chairwoman of Sanlu, the milk company at the heart of the scandal, was given a life sentence. Dozens of officials, dairy executives and farmers have been punished for allowing the contamination to take place.