Say ‘thank you’ to the BoE for nuking the pound: 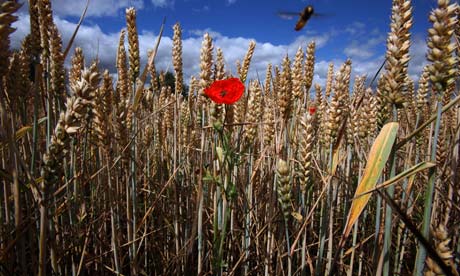 Soaring wheat and other commodity costs on world markets have pushed up UK wholesale food prices at the fastest rate in two years, official figures showed this morning.

Prices of food produced in the UK were 9.8% higher last month than a year ago, the biggest annual increase since October 2008, the Office for National Statistics reported. Imported food prices climbed 4.5% on the year, the fastest rate since October 2009.

Food prices are likely to be pushed even higher in coming months, with refined sugar surging to a record peak of $783.90 a tonne today.

Consumers are now starting to pay more for bread and meat as a result of sharp increases in the price of wheat and corn following poor harvests, the British Retail Consortium reported this week. Vegetable oil and margarine showed double-digit price hikes, while fruit showed its biggest price increases since April 2009. This helped push up food prices overall at 4.4%, the BRC said, the fastest rate in more than a year.

Factory gate inflation picked up slightly in October, the ONS said, but came in lower than expected after the biggest reworking of the data series since 1992. Annual producer output price inflation rose to 4% from 3.8% in September, below City forecasts of 4.4%. Output prices were up 0.6% between September and October due to higher prices for petrol, food and chemical and pharmaceutical products.

Annual input price inflation – manufacturers’ raw material costs – slowed to 8% from 8.7%, despite the sharp rise in food prices. But prices rose 2.1% between September and October on the back of higher crude oil and metal costs.

“Companies are clearly keen to take advantage of decent manufacturing activity so far this year to try and push their prices up and boost their margins in the face of elevated input costs,” said Howard Archer of IHS Global Insight. “We suspect that going forward manufacturers will find it increasingly difficult to raise their prices, given likely slower expansion and significant excess capacity. The Bank of England will certainly be hoping that this is the case.”

The ONS has reclassified the producer price data series to be based on the 2007 style of industrial classification. The reclassification means that producer prices have risen less than previously reported – the 2010 peak in output prices is now shown at 5.0% in May rather than 5.9% in April.

“October’s UK producer prices figures are a bit of a mixed bag, but won’t do a great deal to ease near-term inflation concerns,” said Jonathan Loynes of Capital Economics.

However, he noted that the long lags between produce prices and consumer prices mean that the sharp falls seen in the former last year will continue to feed through into high street prices for some time yet. “Overall, not great. But not disastrous either,” he concluded.