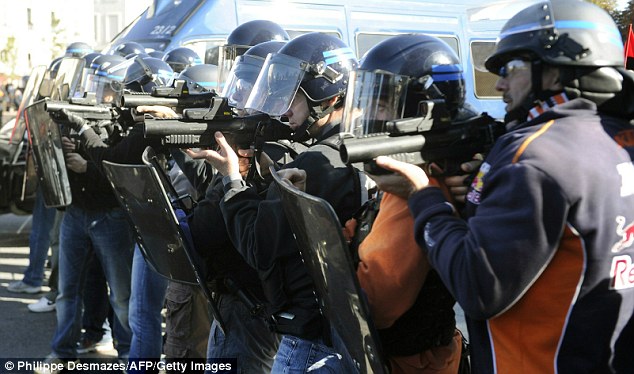 Armed with pump-action shotguns, sidearms and stun grenades the officers look like they belong in a war zone.

In fact they are elite French policemen who were deployed to the historic centre of Lyon yesterday to deal with rioting students.

President Nicolas Sarkozy took the extreme measure in the face of growing protests against an unpopular law aimed at increasing the retirement age from 60 to 62.

Nicknamed ‘Sarko’s Stormtroopers’, the GIPN (National Police Intervention Group) faced down 2,000 youngsters in Place Bellecour where cars had been set on fire and shop windows smashed.

The elite unit, whose motto is Cohesion Brings Strength, was set up in 1972 to deal with terrorists and hostage takers.

‘Deploying them on the streets was a tactical decision deemed necessary because of the acts of violence and vandalism aimed at the community,’ said an interior ministry spokesman. 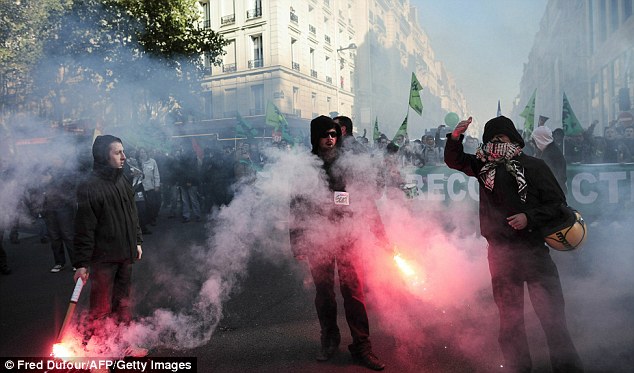 Flare-up: Railway workers protesting on the streets of Paris yesterday

Batons, riot shields and tear gas are the GIPN’s first resort when dealing with troublemakers, but they were also armed with Heckler and Koch short-barrelled, pump-action riot shotguns designed for ‘defensive action’.

Verney-Carron flashball guns, which can stun protesters, were also used in Lyon yesterday.

The GIPN carry Sig Sauer Pro pistols, while their armed support mobile unit has sniper rifles and even Heckler and Koch machine pistols. The men always wear black body armour and helmets and cover their faces with balaclavas.

France’s increasingly militant trade unions have called for more industrial action today even though parts of the country are bordering on anarchy. 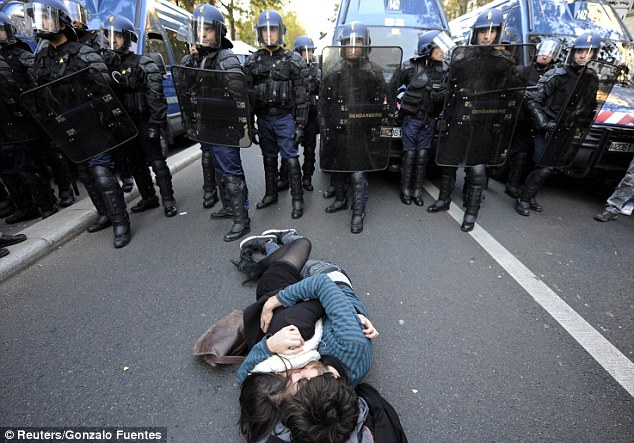 Clinch: Two students kiss in the road in front of riot police trying to control protests in Paris

Bernard Thibault, of the powerful CGT union, said: ‘There is no reason at all to stop. There is no alternative while the government remains intransigent. We need to continue with massive action as soon as next week.

‘We will ask the unions for strong action that will allow people to stop work and go on to the streets.’

The southern city of Lyon has resembled an urban guerrilla war zone this week, according to one local police spokesman.

There have also been clashes in the Paris suburb of Nanterre, where students yesterday joined hundreds of thousands of others from around the city for a mass demonstration.

‘We will head for the senate and, if necessary, try to storm it,’ said one radical student leader who asked not to be named.

‘The government has pushed us to the brink and has threatened our entire future.’

Many fear a re-run of the infamous May 1968 student riots in Paris when millions threatened another French revolution.
Despite the trouble, Mr Sarkozy vowed that his government would pass the new pension bill in a Senate vote expected today.

The president said he would ‘carry the retirement reform through to the end’, no matter how many people objected to it.

His government says raising the minimum retirement age and overhauling the pension system are vital otherwise future generations will receive no pensions at all.

Workers fear the reforms will end what is widely seen as the comfortable French way of life.