I have warned you of a major ‘engineered’ food crisis by the elite before. 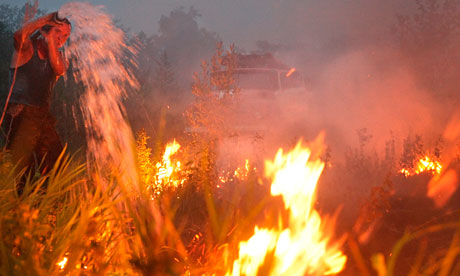 The world may be on the brink of a major new food crisis caused by environmental disasters and rampant market speculators, the UN was warned today at an emergency meeting on food price inflation.

The UN’s Food and Agriculture Organisation (FAO) meeting in Rome today was called last month after a heatwave and wildfires in Russia led to a draconian wheat export ban and food riots broke out in Mozambique, killing 13 people. But UN experts heard that pension and hedge funds, sovereign wealth funds and large banks who speculate on commodity markets may also be responsible for inflation in food prices being seen across all continents.

In a new paper released this week, Olivier De Schutter, the UN’s special rapporteur on food, says that the increases in price and the volatility of food commodities can only be explained by the emergence of a “speculative bubble” which he traces back to the early noughties.

“[Beginning in ]2001, food commodities derivatives markets, and commodities indexes began to see an influx of non-traditional investors,” De Schutter writes. “The reason for this was because other markets dried up one by one: the dotcoms vanished at the end of 2001, the stock market soon after, and the US housing market in August 2007. As each bubble burst, these large institutional investors moved into other markets, each traditionally considered more stable than the last. Strong similarities can be seen between the price behaviour of food commodities and other refuge values, such as gold.”

He continues: “A significant contributory cause of the price spike [has been] speculation by institutional investors who did not have any expertise or interest in agricultural commodities, and who invested in commodities index funds or in order to hedge speculative bets.”

A near doubling of many staple food prices in 2007 and 2008 led to riots in more than 30 countries and an estimated 150 million extra people going hungry. While some commodity prices have since reduced, the majority are well over 50% higher than pre-2007 figures – and are now rising quickly upwards again.

“Once again we find ourselves in a situation where basic food commodities are undergoing supply shocks. World wheat futures and spot prices climbed steadily until the beginning of August 2010, when Russia – faced with massive wildfires that destroyed its wheat harvest – imposed an export ban on that commodity. In addition, other markets such as sugar and oilseeds are witnessing significant price increases,” said De Schutter, who spoke today at The UK Food Group’s conference in London.

Gregory Barrow of the UN World Food Program said: “What we have seen over the past few weeks is a period of volatility driven partly by the announcement from Russia of an export ban on grain food until next year, and this has driven prices up. They have fallen back again, but this has had an impact.”

Sergei Sukhov, from Russia’s agriculture ministry, told the Associated Press during a break in the meeting in Rome that the market for grains “should be stable and predictable for all participants.” He said no efforts should be spared “to the effect that the production of food be sufficient.”

“The emergency UN meeting in Rome is a clear warning sign that we could be on the brink of another food price crisis unless swift action is taken. Already, nearly a billion people go to bed hungry every night – another food crisis would be catastrophic for millions of poor people,” said Alex Wijeratna, ActionAid’s hunger campaigner.

An ActionAid report released last week revealed that hunger could be costing poor nations $450bn a year – more than 10 times the amount needed to halve hunger by 2015 and meet Millennium Development Goal One.

Food prices are rising around 15% a year in India and Nepal, and similarly in Latin America and China. US maize prices this week broke through the $5-a-bushel level for the first time since September 2008, fuelled by reports from US farmers of disappointing yields in the early stages of their harvests. The surge in the corn price also pushed up European wheat prices to a two-year high of €238 a tonne.

Elsewhere, the threat of civil unrest led Egypt this week to announce measures to increase food self-sufficiency to 70%. Partly as a result of food price rises, many middle eastern and other water-scarce countries have begun to invest heavily in farmland in Africa and elsewhere to guarantee supplies.

Although the FAO has rejected the notion of a food crisis on the scale of 2007-2008, it this week warned of greater volatility in food commodities markets in the years ahead.

At the meeting in London today, De Schutter said the only long term way to resolve the crisis would be to shift to “agro-ecological” ways of growing food. This farming, which does not depend on fossil fuels, pesticides or heavy machinery has been shown to protect soils and use less water.

“A growing number of experts are calling for a major shift in food security policies, and support the development of agroecology approaches, which have shown very promising results where implemented,” he said.

Green MP Caroline Lucas called for tighter regulation of the food trade. “Food has become a commodity to be traded. The only thing that matters under the current system is profit. Trading in food must not be treated as simply another form of business as usual: for many people it is a matter of life and death. We must insist on the complete removal of agriculture from the remit of the World Trade Organisation,” she said.