Organic food sales have taken off in China after a series of safety scares, including the disclosure that one in 10 meals is cooked using oil dredged from the sewer. 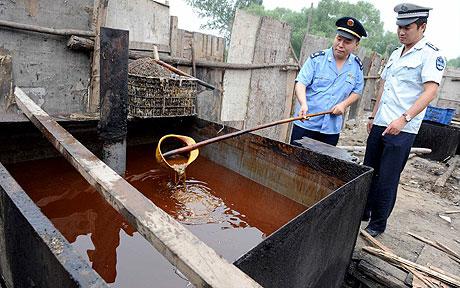 The Chinese now consume more than twice as much organic food as health-conscious Japan.

The market is worth an annual 10billion yuan (£1billion) having quadrupled in the past five years. For comparison, the British organic market is worth roughly £2billion. Interest has been promoted by a series of scares including toxic beans, contaminated milk and pork, pesticide-laced dumplings, chemically-tainted chicken, and the growing presence of what is known as “sewage oil”.

Night soil collectors typically visit the drains behind restaurants late at night to scoop up dregs of oil, which they filter and resell.

The government, which released the figures, has promised to take action against the practice. But since there are no laws against skimming oil from drains, police have had to release any suspects.

In April, a man was caught in broad daylight collecting oil at a sewer in Zhengzhou, Henan province, which he admitted intending to sell to street food vendors for 300 yuan a barrel.

“There is no way to prevent this oil from returning to the food chain,” said Zhen Zhiquan, 32, the manager of a company in Qingdao that turns sewage oil into biofuel.

“Companies like us buy around 10 to 20 per cent of the oil that is dredged from the sewers, but at least 80 per cent is recycled,” he said.

Xie Lili, 25, runs an organic store on the internet. In the aftermath of the oil scare, she said she had seen “a huge increase” in demand for organic salts, oils and spices.

“The volume is 10 to 15 times greater. People became quite scared and preferred to cook at home,” she added.

In the Shanghai suburb of Nanhui, famous for its peaches, the 4,000-acre Duoli Organic Farm was founded in 2005 and left fallow for three years to allow pesticides to seep out of the soil.

“In Shanghai, because land is scarce and the city has 20 million people, farmers are using up to four times the recommended amount of pesticides to boost their yields,” said Wang Tao, the head of the farm’s quality control department. In 2009, Duoli’s sales were 30 million yuan. This year, it expects revenues to more than double.

“It is very expensive, and mostly for rich people,” he said. “Also, Chinese people like to judge their food by how it looks, but organic food does not look so good. It is lumpy and has holes in it.”