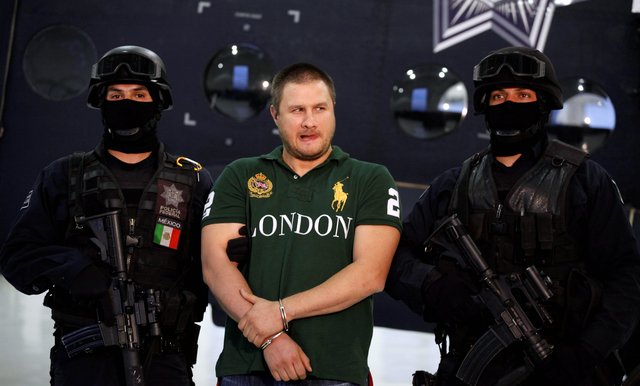 The federal government has posted signs along a major interstate highway in Arizona, more than 100 miles north of the U.S.-Mexico border, warning travelers the area is unsafe because of drug and alien smugglers, and a local sheriff says Mexican drug cartels now control some parts of the state.

The signs were posted by the Bureau of Land Management (BLM) along a 60-mile stretch of Interstate 8 between Casa Grande and Gila Bend, a major east-west corridor linking Tucson and Phoenix with San Diego.

They warn travelers that they are entering an “active drug and human smuggling area” and they may encounter “armed criminals and smuggling vehicles traveling at high rates of speed.” Beginning less than 50 miles south of Phoenix, the signs encourage travelers to “use public lands north of Interstate 8” and to call 911 if they “see suspicious activity.”

Pinal County Sheriff Paul Babeu, whose county lies at the center of major drug and alien smuggling routes to Phoenix and cities east and west, attests to the violence. He said his deputies are outmanned and outgunned by drug traffickers in the rough-hewn desert stretches of his own county.

“Mexican drug cartels literally do control parts of Arizona,” he said. “They literally have scouts on the high points in the mountains and in the hills and they literally control movement. They have radios, they have optics, they have night-vision goggles as good as anything law enforcement has.

He said he asked the Obama administration for 3,000 National Guard soldiers to patrol the border, but what he got were 15 signs.

Arizona Gov. Jan Brewer condemned what she called the federal government’s “continued failure to secure our international border,” saying the lack of security has resulted in important natural recreational areas in her state being declared too dangerous to visit.

In a recent campaign video posted to YouTube, Mrs. Brewer – standing in front of one of the BLM signs – attacked the administration over the signs, calling them “an outrage” and telling President Obama to “Do your job. Secure our borders.”

BLM spokesman Dennis Godfrey in Arizona said agency officials were surprised by the reaction the signs generated when they were put up this summer.

“We were perhaps naive in setting the signs up,” he said. “The intention of the signs was to make the public aware that there is potential illegal activity here. But it was interpreted in a different light, and that was not the intent at all.”

He said there should be “no sense that we have ceded the land,” adding that no BLM lands in Arizona are closed to the public.

“I kind of liken it to if I were visiting a city I were not familiar with and asked a policeman if it were safe to go in a particular area,” Mr. Godfrey said.

Rising violence along the border has coincided with a crackdown in Mexico on warring drug gangs, who are seeking control of smuggling routes into the United States.

More than 28,000 people have died since Mr. Calderon launched his crackdown in late 2006, and the bloodshed shows no sign of ending. Law enforcement authorities have been warning for more than two years that the dramatic rise in border violence eventually would spread into the U.S.

T.J. Bonner, president of the National Border Patrol Council, which represents all 17,500 of the Border Patrol’s front-line agents, said areas well north of the border are so overrun by armed criminals that U.S. citizens are being warned to keep out of those locations.

“The federal government’s lack of will to secure our borders is painfully evident when signs are posted well north of the border warning citizens that armed and dangerous criminals are roaming through those areas with impunity,” he said. “Instead of taking the steps necessary to secure our borders, politicians are attempting to convince the public that our borders are more secure now than ever before.

“Fortunately, some responsible civil servants are candidly warning the public about the dangers that exist not just along the border but, in some cases, well beyond,” he said. “This situation should alarm all sensible people, and should spur endless demands that our legislators take whatever actions are necessary to restore law and order to these areas.”

Rep. Ted Poe, Texas Republican and a member of the House Judiciary and Foreign Affairs committees, said the federal government’s new border security plan apparently is to “erect some signs telling you it’s not safe to travel in our own country.”

“If you are planning on loading up the station wagon and taking the kids to Disneyland, the federal government doesn’t advise going through Arizona – it’s too dangerous and they can’t protect you,” said Mr. Poe. “These signs say to American citizens, the federal government has ceded this area to the drug cartels. Don’t come here; we can’t protect you.”

Rep. Lamar Smith of Texas, the ranking Republican on the House Judiciary Committee and a member of the House Committee on Homeland Security, called the signs “an insult to the citizens of border states.”

“American citizens should not have to be fearful for their lives on U.S. soil,” he said. “If the federal government would do its job of enforcing immigration laws, we could better secure the border and better protect the citizens of border states.”

Meanwhile, he said, politicians in Washington, D.C., including Homeland Security Secretary Janet Napolitano, continue to claim the border is now more secure than ever and, as a result, it is time for comprehensive immigration reform.

“How much more land will our nation cede to drug dealers and terrorists? At what point will the administration understand its obligations to really secure our nation’s borders and create an immigration system that has real integrity?” Mr. Cutler said.

“At the rate we are going, the ‘Red, White and Blue’ of the American flag will be replaced with a flag that is simply white – the flag of surrender.”

Ms. Napolitano said this week that U.S. Customs and Border Protection (CBP) would begin flying a Predator B drone out of Corpus Christi, Texas, on Wednesday, extending the reach of the agency’s unmanned surveillance aircraft across the length of the 1,956-mile border with Mexico.

Two years ago, U.S. Immigration and Customs Enforcement (ICE), the investigative arm of Homeland Security, said in a report that border gangs were becoming increasingly ruthless and had begun targeting not only rivals, but federal, state and local police. ICE said the violence had risen dramatically as part of “an unprecedented surge.”

The Justice Department’s National Drug Intelligence Center, in its 2010 drug threat assessment report, called the cartels “the single greatest drug trafficking threat to the United States.” It said Mexican gangs had established operations in every area of the United States and were expanding into rural and suburban areas. It said assaults against U.S. law enforcement officers along the southwestern border were on the increase – up 46 percent against Border Patrol agents alone.

At the same time, the Justice Department brought a lawsuit to stop a new immigration enforcement law in Arizona, saying it violated the Constitution by trying to supersede federal law and by impairing illegal immigrants’ right to travel and conduct interstate commerce.

Mr. Cutler said it was “outrageous” for the BLM to direct travelers to dial 911 to report suspicious activities since the calls do not go to the federal government but to state and local police. He said the signs are telling Americans to call state and local law enforcement authorities to deal with border lawlessness while at the same time telling Arizona that only the federal government can write and enforce immigration laws.

“You can’t make this stuff up,” he said.

Mr. Godfrey said that just because the signs direct travelers who witness illegal activity to call 911, “that does not mean that only a local agency will respond.”

“The idea is that people will get help as quickly as they can,” he said.

Sheriff Babeu has dealt firsthand with the rising violence in his county since his 2008 election. One of his deputies, Louie Puroll, was shot and critically wounded in April after he spotted five men he suspected of transporting drugs along a remote span of desert near Interstate 8 and Arizona 84.

He said his experience makes him see the issue differently from the administration in Washington.