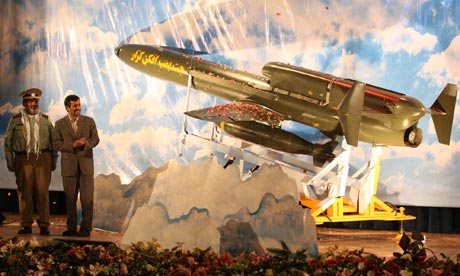 Iran has unveiled an unmanned, long-distance bomber drone described by the country’s president, Mahmoud Ahmadinejad, as “an ambassador of death” to Tehran’s enemies.

At a ceremony today, Ahmadinejad said the unmanned aerial vehicle (UAV) – named Karrar, meaning “striker” in Persian – had “a main message of peace and friendship” but was intended to deter aggression “and keep the enemy paralysed in his bases”.

The presentation came as technicians began fuelling the Islamic republic’s first nuclear power station, at Bushehr, in a development Israel has described as “totally unacceptable”.

The US and Britain say the Bushehr plant, which is monitored by the UN’s nuclear watchdog, poses no proliferation threat because Russia is supplying the nuclear fuel and will remove the spent fuel rods, minimising any risk that they could be used to make nuclear weapons.

Iran is under UN sanctions to force a halt to uranium enrichment because of fears that it secretly plans to build nuclear weapons. It flatly denies having any such intention.

(Iran has not the capability to enrich uranium over 90%, which is neccessary to built a nuclear weapon.)

Ahmed Vahidi, the Iranian defence minister, said the Karrar had a range of up to 620 miles, which is not far enough to reach Israel.

The drone was the latest item of military hardware to be inaugurated by Iran against a background of continuing tension over the nuclear issue.

On Friday, Tehran test-fired a new surface-to-surface missile called the Qiam (meaning “rising”). It has already developed long-range missiles capable of hitting Israel and eastern Europe and of carrying a nuclear warhead.

Earlier this month, the Debka file website, which appears to have links to Israeli intelligence (LOL! Debka file is a Mossad asset!), reported that the father of Iran’s UAV programme, Reza Baruni, had been assassinated in a bomb attack in his home town of Ahwaz, in Khuzestan.

There has been no confirmation of this unattributed claim from any other source.

It is widely believed that western intelligence services, Israel and perhaps Arab countries have been seeking to sabotage the Iranian nuclear programme. Experts say the programme appears to have suffered setbacks.

The Iranian media has previously reported the successful test of a radar-evading “stealth” drone with bombing capabilities. In March 2009, US fighter jets in Iraq shot down an unmanned Iranian spy drone, generating concern in Washington.

Yesterday, Ahmadinejad warned that any attack against Iran would be “suicidal”.

Still, the threat of pre-emptive military action that could ignite war across the Middle East may be receding. Obama administration officials were reported last week to have told Israel they believe Iran is still a year away from being able to build a nuclear weapon.

The New York Times quoted Israeli officials as saying that their assessments were coming into line with Washington’s view, but they remain suspicious that Iran has a secret uranium enrichment site yet to be discovered – after one was revealed in a mountainside near Qom last September as sanctions moves intensified.

Israel, an undeclared atomic power which, unlike Iran, has not signed the nuclear non-proliferation treaty (NPT), has often warned that it cannot live with a nuclear-armed Iran and hinted that it may attack it, as it did Iraq’s nuclear reactor in 1981.

Iran has repeatedly declared a willingness to return to nuclear talks with the EU, but the exact nature of any negotiations has yet to be defined. Nothing has happened since October.

Ahmadinejad was quoted in a Japanese newspaper on Friday as saying Iran would be prepared to stop higher-grade uranium enrichment if it was guaranteed nuclear fuel supplies for a research reactor. But the country’s supreme leader, Ayatollah Ali Khamenei – who makes all key national security decisions – said last week that Iran would not talk to the US unless sanctions and military threats were lifted.

– Who is blowing up Iran’s gas pipelines?