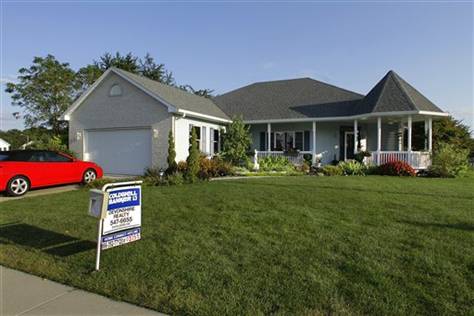 Sales of previously occupied homes, like this one in Springfield, Ill., plunged last month to the lowest level in 15 years, despite the lowest mortgage rates in decades and bargain prices.

WASHINGTON — Sales of previously occupied homes plunged last month to the lowest level in 15 years, despite the lowest mortgage rates in decades and bargain prices in many areas.

July’s sales fell by more than 27 percent to a seasonally adjusted annual rate of 3.83 million, the National Association of Realtors said Tuesday. It was the largest monthly drop on records dating back to 1968, and sharp declines were recorded in all regions of the country.

The plunge in home sales also magnified fears about the broader economy.

“The housing market is undermining the already faltering wider economic recovery,” said Paul Dales, U.S. economist with Capital Economics. “With the increasingly inevitable double-dip in prices yet to come, things could yet get a lot worse.”

Sales were particularly weak among homes in the lower- to mid-priced ranges. For example, in the Midwest, homes priced between $100,000 and $250,000 tumbled nearly 47 percent.

The tax credits caused many of those buyers to speed up their home purchases. Sales have weakened since the credits expired on April 30.

As sales have slowed, the inventory of unsold homes on the market grew to nearly 4 million in July. That’s a 12.5 month supply at the current sales pace, the highest level in more than a decade. It compares with a healthy level of about six months.

One reason the market is hurting is that buyers and sellers are in a standoff over prices. Many sellers are reluctant to lower their prices. And buyers are hesitating because they think home prices haven’t bottomed out.

Laurie Salaman has been trying to sell her home in New York City for a year so she can move to the suburbs. She’s had no offers, even after cutting her listing price on the three-bedroom Bronx home from $475,000 to $449,900.

She notes that she has upgraded the kitchen and bathrooms, refinished the basement and put in new decks and patios. Her goal is to take about $100,000 from the sale and put it toward the purchase of the new house. She said she won’t lower her price any further.

“That’s my bottom price,” said Salaman, 55. “If I don’t get that price, then I will hold off until the market gets a little better,” she said.

The housing market is also being hampered by the weakening economic recovery. Unemployment remains stuck at 9.5 percent and many potential buyers worry they might not have a job to pay the mortgage.

Prices have fallen in part because foreclosures are running about 10 times higher than before the housing bust. Though the average rate for a 30-year fixed mortgage has sunk to 4.42 percent, many people can’t qualify because banks have tightened their lending standards.

Home sales picked up in the spring when the government was offering tax credits. But sales have sputtered since the tax credits expired.