– Sarkozy spent £160m on events and refurbishment during French EU presidency, incl. £250,000 on a personal shower he did not use

Nicolas Sarkozy’s dream of having his own presidential jet to rival America’s Air Force One are about to come true with “Air Sarko One”, a £150 million aircraft complete with bedroom, air filter system so he can smoke cigars, and a shower. 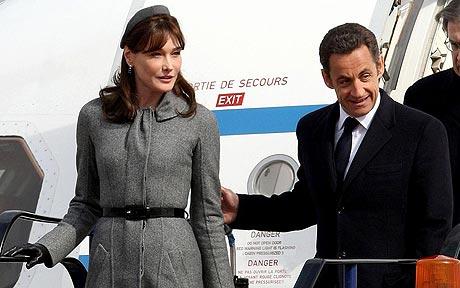 The specially upholstered Airbus A330-200, has just been taken on its first test flight in Bordeaux, southwestern France, with all internal fittings due for completion by October.

A fleet of smaller jets is also to replace the current Falcon 50 and 900 models at ministers’ disposal. This includes two Falcon 7Xs, models often favoured by the world’s jet set.

Presidential air force officials have dubbed it “Air Carla One” after his ex-supermodel wife.

The French leader is understood to have long envied the luxurious conditions in which Barack Obama, the US President flies across the world in his Boeing 747-200B, and has complained that his two smaller Airbus A319s lacked the necessary presidential stature.

“Air Sarko One” as the plane has been dubbed, will have a wingspan a good two feet longer than the US model.

It has also been claimed that Mr Sarkozy had wanted a full-sized presidential bathtub on the plane but he was told that it could prove a problem as under heavy turbulence the bathwater may overflow and seep into the air craft at the risk of sparking short circuits.

The president was told he would have to settle for a flood-proof hip bath, according to Le Canard Enchaîné, a claim the government denies.

But Mr Sarkozy’s €176 million (£147 million) purchase and refit of the jet from tourist airline Air Caraïbes has raised eyebrows as the winds of austerity blow through Europe and other leaders are reining in their perks.

David Cameron has made great play of his decision to travel on commercial flights as part of the Government’s austerity drive.

Tony Blair’s plans to purchase two private jets, immediately dubbed “Blair Force One,” at a cost to the taxpayer of £100 million, were scrapped by Gordon Brown soon after he came to power.

Mr Sarkozy has come under criticism for the new plane weeks after ordering ministers to cut spending and following a string of embarrassing expenses scandals.

Earlier this month, Alain Joyandet, secretary of state for overseas development stood down amid reports he had hired a private jet at a cost of €116,500 to fly to the Caribbean.

Then Christian Blanc, state secretary for the Greater Paris region was forced to resign after it emerged that he had spent €12,000 on Cuban cigars at the taxpayer’s expense.

Luc Chatel, the government spokesman, said: “There is nothing ostentatious, simply a desire to have equipment fitting for the world’s fifth power”.

He has argued that the cost of new presidential jet will be offset by the sale of two smaller A319s currently used. However, the two medium-range jets are only expected to fetch around €20 million.