That still is ‘peanuts’ compared to this:

Some elite criminals got very rich.

Oil funds were ‘vulnerable to inappropriate uses and undetected loss’ (Sure!) 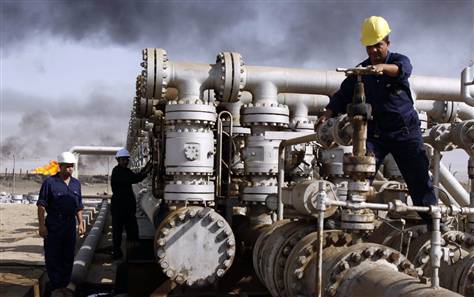 Iraqis work at the Rumaila oil refinery, near Basra. An audit has found that the Pentagon “could not provide documentation to substantiate how it spent $2.6 billion” in Iraqi oil money.

BAGHDAD — A U.S. audit has found that the Pentagon cannot account for over 95 percent of $9.1 billion in Iraq reconstruction money, spotlighting Iraqi complaints that there is little to show for the massive funds pumped into their cash-strapped, war-ravaged nation.

The $8.7 billion in question was Iraqi money managed by the Pentagon, not part of the $53 billion that Congress has allocated for rebuilding. It’s cash that Iraq, which relies on volatile oil revenues to fuel its spending, can ill afford to lose.

“Iraq should take legal action to get back this huge amount of money,” said Sabah al-Saedi, chairman of the Parliamentary Integrity Committee. The money “should be spent for rebuilding the country and providing services for this poor nation.”

The report by the Special Inspector General for Iraq Reconstruction accused the Defense Department of lax oversight and weak controls, though not fraud.

“The breakdown in controls left the funds vulnerable to inappropriate uses and undetected loss,” the audit said.

The Pentagon has repeatedly come under fire for apparent mismanagement of the reconstruction effort — as have Iraqi officials themselves.

Seven years after the U.S.-led invasion, electricity service is spotty, with generation capacity falling far short of demand. Fuel shortages are common and unemployment remains high, a testament to the country’s inability to create new jobs or attract foreign investors.

Complaints surfaced from the start of the war in 2003, when soldiers failed to secure banks, armories and other facilities against looters. Since then the allegations have only multiplied, including investigations of fraud, awarding of contracts without the required government bidding process and allowing contractors to charge exorbitant fees with little oversight, or oversight that came too late.

But the latest report comes at a particularly critical time for Iraq. Four months after inconclusive elections, a new government has yet to be formed, raising fears that insurgents will tap into the political vacuum to stir sectarian unrest.

Lawmakers met Tuesday, but for the second time this month failed to convene a parliament session, leaving wide open the question of when the new government will take shape.

Underscoring its financial challenges, the International Monetary Fund in March approved a $3.6 billion loan to help Iraq meet its obligations. Iraq is projected to run a deficit through 2011, according to analysts, with a possibility of a surplus following that hinging on oil prices.

Iraq took a financial hit in 2008 as oil prices plummeted on the back of the global financial meltdown. While those prices have since rebounded, Iraq remains at the mercy of international oil markets, with revenues from petroleum sales accounting for over 90 percent of its government budget.

The $9.1 billion in question came from the Development Fund for Iraq, which was set up by the U.N. Security Council in 2003. The DFI includes revenues from Iraq’s oil and gas exports, as well as frozen Iraqi assets and surplus funds from the defunct, Saddam Hussein-era U.N. oil-for-food program.

Iraq had given the U.S. authorization to tap into the fund, which is held in New York, for humanitarian and reconstruction efforts, withdrawing that approval in December 2007.

With the establishment of the Coalition Provisional Authority, which ran Iraq shortly after the start of the U.S. invasion in 2003 until mid-2004, about $20 billion was placed into the account. The $9.1 billion audited by the Iraq reconstruction inspector general were funds withdrawn from that account between 2004 and 2007.

The report found that the Defense Department could not “readily account for its obligations, expenditures and remaining balances associated” with the DFI. At issue was $8.7 billion, or 95 percent of the withdrawn funds.

Of this amount, the Pentagon could not account at all for $2.6 billion, according to the audit.

Tracing the rest of the money is difficult because of a combination of lax financial controls and management, the failure to designate an organization to oversee the spending and the failure to set up and deposit the funds in special accounts, as required by the Treasury Department.

The Defense Department, in responses attached to the audit, said it agreed with the report’s recommendations to establish better guidelines for monitoring such funds, including appointing an oversight organization mostly likely by November.

The failure to properly manage billions in reconstruction funds has also hobbled the troubled U.S.-led effort to rebuild Afghanistan. About $60 billion have poured into Afghanistan since 2001 in hopes of bringing electricity, clean water, jobs, roads and education to the crippled country.

The U.S. alone has committed $51 billion to the project since 2001, and plans to raise the stakes to $71 billion over the next year — more than it has spent on reconstruction in Iraq since 2003.

An Associated Press investigation showed that the results so far — or lack of them — threaten to do more harm than good. The number of Afghans with access to electricity has increased from 6 percent in 2001 to only about 10 percent now, far short of the goal of providing power to 65 percent of urban and 25 percent of rural households by the end of this year.

As an example of the problems, a $100 million diesel-fueled power plant was built with the goal of delivering electricity to more than 500,000 residents of the capital, Kabul. The plant’s costs tripled to $305 million as construction lagged a year behind schedule. The plant now often sits idle because the Afghans were able to import cheaper power from neighboring Uzbekistan before the plant came online.