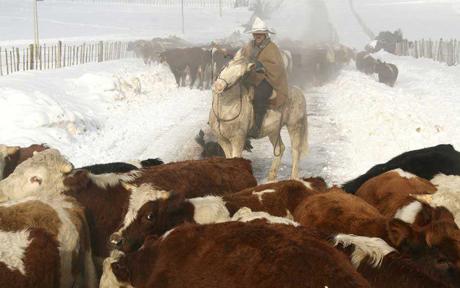 Ever more risibly desperate become the efforts of the believers in global warming to hold the line for their religion, after the battering it was given last winter by all those scandals surrounding the UN’s Intergovernmental Panel on Climate Change.

One familiar technique they use is to attribute to global warming almost any unusual weather event anywhere in the world. Last week, for instance, it was reported that Russia has recently been experiencing its hottest temperatures and longest drought for 130 years. The head of the Russian branch of WWF, the environmental pressure group, was inevitably quick to cite this as evidence of climate change, claiming that in future “such climate abnormalities will only become more frequent”. He didn’t explain what might have caused the similar hot weather 130 years ago.

Meanwhile, notably little attention has been paid to the disastrous chill which has been sweeping South America thanks to an inrush of air from the Antarctic, killing hundreds in the continent’s coldest winter for years.

In America, the National Oceanic and Atmospheric Administration (NOAA) has been trumpeting that, according to its much-quoted worldwide temperature data, the first six months of this year were the hottest ever recorded. But expert analysis on Watts Up With That, the US science blog, shows that NOAA’s claimed warming appears to be strangely concentrated in those parts of the world where it has fewest weather stations. In Greenland, for instance, two of the hottest spots, showing a startling five-degree rise in temperatures, have no weather stations at all.

A second technique the warmists have used lately to keep their spirits up has been to repeat incessantly that the official inquiries into the “Climategate” scandal have cleared the top IPCC scientists involved of any wrongdoing, and that their science has been “vindicated”. But, as has been pointed out by critics like Steve McIntyre of Climate Audit, this is hardly surprising, since the inquiries were careful not to interview any experts, such as himself, who could have explained just why the emails leaked from the Climatic Research Unit (CRU) were so horribly damaging.

The perfunctory report of the Science Appraisal Panel, chaired by Lord Oxburgh, examined only 11 papers produced by the CRU, none of them remotely connected to what the fuss was all about. Last week Andrew Montford, author of The Hockey Stick Illusion: Climategate and the Corruption of Science, revealed on his blog (Bishop Hill – bishophill.squarespace.com) that the choice of these papers was approved for the inquiry by Sir Brian Hoskins, of the Grantham Institute for Climate Change at Imperial College, and by Phil Jones, the CRU’s former director – an appraisal of whose work was meant to be the purpose of the inquiry.

A third technique, most familiar of all, has been to fall back on the dog-eared claim that leading sceptics only question warmist orthodoxy because they have been funded by “Big Oil” and the “fossil fuel industry”. Particularly bizarre was a story last week covering the front page and an inside page of one newspaper, headed “Oil giant gives £1 million to fund climate sceptics”.

The essence of this tale was that Exxon Mobil, the oil giant that is the world’s third biggest company, last year gave “almost £1 million” to four US think-tanks. These had gone on to dismiss the Climategate inquiries as “whitewashes”.

It was hardly necessary to be given money by Exxon to see what was dubious about those inquiries. Not one of the knowledgeable sceptics who have torn them apart has received a cent from Big Oil. But what made this particularly laughable was that the penny-packets given to think-tanks that have been largely irrelevant to the debate are utterly dwarfed by the colossal sums poured into the army of groups and organisations on the other side of the argument.

Even the big oil companies have long been putting their real money into projects dedicated to showing how they are in favour of a “low-carbon economy”. In 2002 Exxon gave $100 million to Stanford University to fund research into energy sources needed to fight global warming. BP, which rebranded itself in 2004 as “Beyond Petroleum”, gave $500 million to fund similar research.

The Grantham Institute provides another example. It was set up at the LSE and Imperial College with £24 million from Jeremy Grantham, an investment fund billionaire, to advise governments and firms on how to promote and invest in ways to “fight climate change”, now one of the fastest-growing and most lucrative businesses in the world.

Compare the funding received by a handful of think-tanks to the hundreds of billions of dollars lavished on those who speak for the other side by governments, foundations, multinational corporations, even Big Oil, and the warmists are winning hands down. But only financially: they are not winning the argument.