Soldiers applaud decision to pull out of ‘Sangingrad’, where IEDs and sniper fire cost many lives 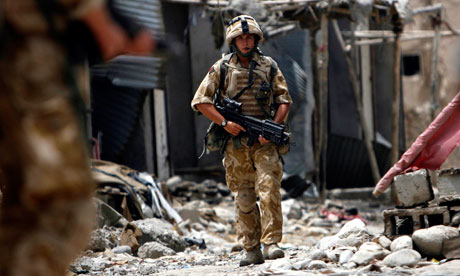 A British soldier on patrol in Sangin in 2007. The district has a long history of being troublesome to foreigners. (Reuters)

The first troops arrived in Sangin in June 2006, filling sandbags as they fought off the Taliban – an enemy that, four years and at least 100 British deaths later, refuses to go away.

As the casualties have mounted over the years, soldiers stationed in Sangin protected themselves with higher walls and an ever darker sense of humour.

“Welcome to Sangingrad” reads the graffiti at the base entrance, in a bitter allusion to a battle that marked a turning point in world war two. Whether that comparison will prove to be prophetic, given the announced withdrawal, remains to be seen.

One senior British non-commissioned officer who was due to deploy to the district in September today described Sangin as a “hellhole”.

“It’s very hard to dominate without a massive amount of manpower. All the locals there are pro-Taliban. It’s an IED [improvised explosive device] hell and it’s hard to keep eyes on everywhere.”

He was not surprised to learn of the pullout. “Sangin has been a strategic failure. We are not having the desired effect there.”

There have been moments of hope. In 2007, American and Afghan infantrymen helped clear the Taliban from Sangin. “This is an incredibly exciting time for the local people. Now they will see the benefits of reconstruction,” one young British officer said at the time.

But his optimism was short-lived. Faced with superior soldiers and firepower, the Taliban skillfully employed every means at their disposal. Initially attacking with small arms and mortars, they later switched to the IED – bombs scattered across the fields and rough dirt roads that have claimed the greatest number of British lives.

Last month the deputy commander of British and US forces in Helmand, Brigadier George Norton, said the Sangin militants had switched again, now attacking with long-distance, small-arms fire – similar to sniper fire, although not as effective.

Sangin has a long history of being troublesome to foreigners. It was the scene of the first major military engagement of the second Anglo-Afghan war of 1878, when the British fought a cavalry battle against 1,500 fighters.

The latest generation of British visitors tried to remain upbeat, always claiming that the Taliban were being pushed out, and that normal life in the town was on the verge of resuming.

But as David Gill, a photographer who visited the town frequently in the past 15 months put it, Sangin was “like a ghost town in Death Valley where you drive through and all you see is a sign flapping in the wind”.

In some of the more benign areas of Helmand, children may offer the occasional wave to passing soldiers, Gill said, but in Sangin “all you can feel is the intense hatred of a people who hate everything you stand for”.

Another senior NCO, who has served there, said soldiers had seen the areas become more stable, with a local market starting to be established. “But it’s a very, very strong Taliban area, and a lot of drugs are dealt through that town.

“It’s at the bottom of the mountain, and it’s on the main river and the main drug route, and is the major area for growing poppies. There’s so much resistance because the people there don’t want that to change.”

The British mission has also been badly undermined by the failures of the Afghan government. Local leaders in Sangin have been weak, corrupt or linked to the drugs trade. Officers wrestle with fiendishly complicated local tribal politics.

As the death toll mounted, the political storm blew harder in Britain. The first row was over the availability of scarce helicopters to move troops and supplies into the stricken town.

Then Operation Panther’s Claw, which began in June 2009, was billed as the big British push to clear the area from Sangin to Gereshk to the provincial capital, Lashkar Gah, of militants in time for Afghan elections later that year. In fact the map of the area has changed little in the intervening 12 months.

Last April, in the runup to the election, David Cameron offered to stop criticising Gordon Brown’s government over Afghanistan if it pulled out of areas such as Sangin where the army was overstretched; he was rebuffed and told that “these are judgments for generals”.

The second British officer today said the decision to pull out was “a good thing” from a soldier’s point of view. “And from the bigger picture, as long as … somebody else is coming in, that’s good. It’s far too early to just pull out because it’s not stable, but if the Americans are going to go in there then let them take the worry.

“We have paid an incredibly high price in Sangin. If you lose one soldier in one place, that’s already too high a price to pay, but an awful lot of blood has been shed. So in that sense, I am pleased we will be leaving.”