“Camera systems that can recognise street signs and then take over control of a car ….”

Intelligent cars fitted with aircraft-style black boxes that can send video footage and information about driving behaviour during accidents to the police and insurance companies are being developed by computer scientists. 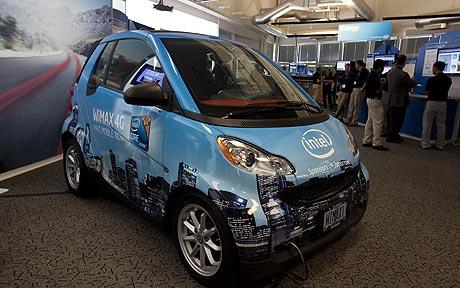 An electrical car with Intel Connected Car applications sits on display at the Intel Research Day in Mountain View, California

The car, which is being developed by researchers at computer chip giant Intel, will record information about the vehicle speed, steering and braking along with video footage from inside and outside the vehicle.

This would be automatically sent to police and insurance companies in the event of an accident to make it easier to determine the cause of car crashes and identify the person responsible.

The device forms part of an intelligent car envisaged by researchers at computer chip giant Intel. They are developing technology that will transform cars into smart vehicles that are able to detect dangers on the road and even take over control from motorists.

They have been in discussions with car manufacturers about developing cars that are permanently connected to the internet and other vehicles using wireless technology.

Camera systems that can recognise street signs and then take over control of a car if the motorist tries to drive the wrong way up a one-way street, for example, are being developed for use in vehicles.

On board sensors will also be able to detect pot holes in the road and report their location to road maintenance authorities as the car is moving.

The cars will also be able to track the location of surrounding vehicles and alert drivers if they get too close or try to change lanes when another vehicle is in their blind spot.

Using the LED rear and head lights found in most modern cars, the car is able to track the location of other vehicles and display them on a satellite navigation map.

Motorists will also be able to use their mobile phone or computer lock and unlock their car remotely, turn on the alarm and even start the engine to warm it up in the morning.

The technology was revealed at a research showcase by Intel in Santa Clara, California, last week. The company has been in discussions with car manufacturers about putting the technology into new vehicles.

Justin Ratner, the director of Intel Laboratories and chief technology officer, said: “We are looking at a whole range of enhancements that will improve the driving experience, safety and security of vehicles.

“The intelligent vehicle is what we are talking about here. Once a car is connected, more or less on a continuous basis, all sorts of interesting possibilities present themselves.

“With vision systems on cars, it is perfectly reasonable for a car on its own to see the sign that says ‘wrong way’ or ‘do not enter’ and bring the vehicle to a halt at the side of the road so we don’t have these senseless accidents where someone has failed to recognise a sign.

Insurance companies are expected to welcome on-board car systems that will reduce the risk of accidents.

A spokesman for the Association of British Insurers said that aviation style black box technology for recording the circumstances around accidents could also help speed up payouts by reducing delays in determining causes of accidents.

He said: “Insurance companies are always looking at new in car technology. A system like this could certainly help speed up the process of determining the cause and responsibility of an accident.

“Any system would have to not increase the cost of repairing vehicles though, to ensure that motorists see a fall in their insurance bills.”