Council “bin police” are punishing hundreds of households with bigger fines than those given by police to shoplifters, it can be revealed. 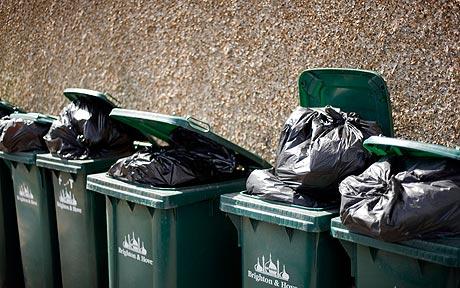 Councils are issuing fines of up to £110 for such infringements as putting their bins out for collection at the wrong time, over filling bins, or putting recycling into the wrong boxes

Figures obtained by The Sunday Telegraph have revealed that local authorities issued more than 1,240 fixed penalty notices last year for breaking rules on recycling and putting out rubbish.

Councils are issuing fines of up to £110 for such infringements as putting their bins out for collection at the wrong time, over filling bins, or putting recycling into the wrong boxes.

That compares to the £80 spot fines that can be issued by police to people caught shoplifting.

The controversial rules have been condemned as “draconian” and are deeply unpopular with householders.

Councils insist the fines are necessary. They say that wheelie bins left on pavements are unsightly and may cause a hazard to the elderly.

They claim they must enforce rules on recycling to ensure the government can meet European targets on reducing the amount of rubbish which goes to landfill.

Environmental wardens, nicknamed the “bin police” are sent out to look for infringements and in some cases have rummaged through people’s rubbish to inspect the contents or even to find documents linking the rubbish to householders.

As well as the fines, local authorities have issued 24,914 official Statutory Notices last year threatening householders with fines. A further 45,010 warning letters were also sent out pointing out breaches in bin and recycling rules.

Officials in Nottingham City have issued 451 fines to householders for breaking these rules in the past year while in Hammersmith and Fulham, London, there were 262 fines handed out for the same offence.

In other areas, such as Corby Borough Council where 18 fines were issued in the past year, householders were punished for overfilling their bins while other councils targeted residents who had left out extra sacks of rubbish.

Matthew Elliott, Chief Executive of the TaxPayers’ Alliance, said: “It is excessively draconian to fine people for putting their bins out at the wrong time or making an occasional mistake when sorting recycling.

“People pay a lot to their councils, and they do not deserve to be bossed around by petty officials in return. Some councils seem to have forgotten that they are there to serve the public, and that means being flexible and helpful, not oppressive and money-grabbing.”

The Sunday Telegraph contacted all 358 local authorities in England with responsibility for collecting domestic waste and received responses from 207 councils. Of these 40 said they had issued 1,247 fixed penalty notices to householders in the past year.

The total number of fixed penalty notices issued across the whole country is likely to be much higher since 151 councils failed to respond.

Since 2007 the number of fines and the amount of the fines has increased following guidance issued by the former Labour government giving local authorities the power to use environmental legislation to increase recycling and cut down on domestic waste.

In 2006/07, the last time official statistics on fixed penalty notices were made public, there were 988 fines issued and £35,000 paid by residents.

In the latest figures supplied by councils, there were also 44 cases where residents had been prosecuted in court for failing to pay fixed penalty notices.

Last week Daphne Thompson, 44, from Canterbury, was issued with a £700 fine and ordered to pay court costs after being prosecuted for failing to sort out her recycling into clear sacks and for putting her household waste into blue sacks instead of a grey bin provided.

A spokesman for the Local Government Association said that councils set their own policies on enforcing bin regulations in an attempt to meet targets on reducing the amount of waste going to landfill as set by the European Union.

The hardline policies on bins have faced strong opposition from campaigners who claim they are punishing otherwise law-abiding citizens and could lead to an increase in fly tipping.

Householders have often complained of being confused by the complicated multi-bin systems being adopted by many councils.

Alex Deane, Director of Big Brother Watch, said: “This is an absurdly high prosecution rate for such a minor crime. Councils introduced absurdly complex new rules about rubbish, and their bin spies hammer residents when they innocently get it wrong.

“Overbearing behaviour like this from councils isn’t really about recycling – it’s about council revenue raising. It must stop.”

The new Coalition Government is now preparing to scrap many of the powers given to councils by Labour to enforce bin policies.