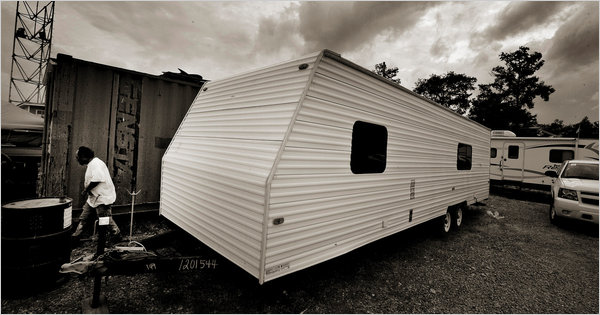 A FEMA trailer at Bud’s Boat Rentals in Belle Chasse, La., with a non-FEMA trailer behind it.

VENICE, La. — In the wake of Hurricane Katrina, they became a symbol of the government’s inept response to that disaster: the 120,000 or so trailers provided by the Federal Emergency Management Agency to people who had lost their homes.

The trailers were discovered to have such high levels of formaldehyde that the government banned them from ever being used for long-term housing again.

Some of the trailers, though, are getting a second life amid the latest disaster here — as living quarters for workers involved with the cleanup of the oil spill.

They have been showing up in mobile-home parks, open fields and local boatyards as thousands of cleanup workers have scrambled to find housing.

Ron Mason, owner of a disaster contracting firm, Alpha 1, said that in the past two weeks he had sold more than 20 of the trailers to cleanup workers and the companies that employ them in Venice and Grand Isle, La.

Even though federal regulators have said the trailers are not to be used for housing because of formaldehyde’s health risks, Mr. Mason said some of these workers had bought them so they could be together with their wives and children after work.

“These are perfectly good trailers,” Mr. Mason said, adding that he has leased land in and around Venice for 40 more trailers that are being delivered from Texas in the coming weeks. “Look, you know that new car smell? Well, that’s formaldehyde, too. The stuff is in everything. It’s not a big deal.”

Not everyone agreed. “It stunk to high heaven,” said Thomas J. Sparks, a logistics coordinator for the Marine Spill Response Corporation, as he stood in front of the FEMA trailer that was provided to him by a company working with his firm. Mr. Sparks said the fumes in the trailer from formaldehyde, a widely used chemical in building materials like particle board, were so strong that he had asked his employer to provide him with a non-FEMA trailer.

The trailers — which are being resold for $2,500 and up — started down their road to infamy after Hurricane Katrina in August 2005, when FEMA officials ordered nearly $2.7 billion worth of trailers and mobile homes to house victims of the storm.

Within months, some of these residents began complaining about breathing problems and burning eyes, noses and throats. One man who had complained about fumes was found dead in his trailer in June 2006.

Federal officials later discovered that formaldehyde — an industrial chemical that can cause nasal cancer, aggravates respiratory problems and may be linked to leukemia — was present in many of these housing units in amounts that exceeded federal limits. Scientists have since concluded that the high levels of formaldehyde found in the trailers probably resulted from cheap wood and poor ventilation. FEMA has produced other models and later batches of the trailers that do not have the health risks that the trailers built for Hurricane Katrina victims did.

But federal officials have struggled to figure out what to do with the contaminated trailers, which have cost nearly $130 million a year to store and maintain, according to federal records. As a result, the government decided to sell the trailers in 2006.

The trailers have found a ready market in the gulf.

“The price was right,” said Buddy Fuzzell, an executive with Cahaba Disaster Recovery, a contracting firm that bought 15 trailers for about 45 cleanup workers.

Several buyers said in interviews that they were unaware of any prohibition on using the trailers for housing.

In an April hearing, members of the House Energy Subcommittee on Commerce, Trade and Consumer Protection raised concerns that the trailers would end up being used for housing. More than 100,000 trailers have been sold so far in public auctions.

The trailers are “not intended to be used as housing,” said David Garratt, FEMA’s associate administrator for mission support. “Subsequent owners must continue to similarly inform subsequent buyers for the life of the unit.”

These rules are not being followed in many cases, however. Officials with the inspector general’s office of the General Services Administration said Wednesday that they had opened at least seven cases concerning buyers who might not have posted the certification and formaldehyde warnings on trailers they sold.

Federal records indicate that of the hundreds of companies and individuals who have bought the trailers, dozens are in Louisiana. They include Henderson Auctions, which bought 23,636 units for $18 million, and Kite Brothers RV, which bought 6,511 mobile homes and travel trailers for $16 million.

On Henderson Auctions’ Web site, a spokeswoman is quoted in a news video saying that people who live on the street or in their cars would much rather live in the trailers and that the formaldehyde has dissipated after four or five years.

Caren Auchman, a spokeswoman for the General Services Administration, said in an e-mail message that her agency was taking steps to ensure that the units were not used for housing.

Most of the workers in the gulf are not living in the trailers but in newer quarters provided by BP, its subcontractors or by state or federal agencies.

Still, housing remains tight. In June, Mr. Mason’s firm and another consulting firm began proposing a plan to large contractors in the region to put about 300 of the trailers on barges for offshore worker housing.

Officials from BP and the Center for Toxicology and Environmental Health, which is BP’s subcontractor that is handling most of the air sampling in the region, said they had no plans to move forward with the proposal.

But others are not hesitating.

John Sercovich, the owner of Bud’s Boat Rentals in Belle Chasse, La., said that he thought the trailer he bought for some of his workers to stay in was more than adequate.

“We couldn’t have afforded it any other way,” he said.

Standing in a small field surrounded by a new shipment of the trailers, Mr. Mason declined to say whether he informed buyers of the formaldehyde risks or kept warning labels on the trailers.

One of Mr. Mason’s trailers, shown to a reporter, had an overpowering smell of formaldehyde inside and none of the required placards on the outside or inside indicating the formaldehyde risk or that it was not supposed to be used for housing. The trailer did, however, have a note taped inside to call FEMA.

Mr. Mason, who is based in Texarkana, Tex., added that all of his customers have been happy and that he planned to lease land for 50 more trailers that he would rent out to workers.