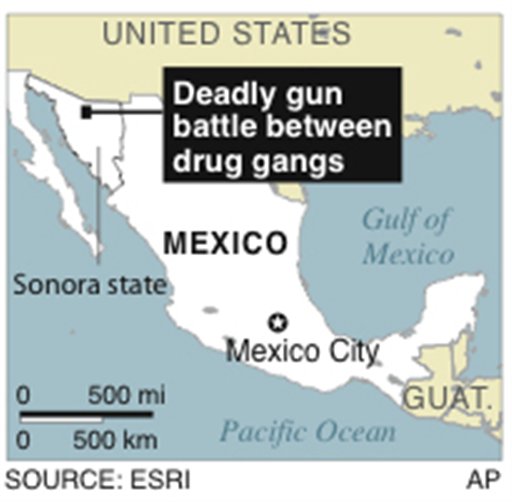 Map locates Sonora state in Mexico, where a deadly gun battle between rival drug and migrant trafficking gangs near the U.S. border occurred.

The fire fight occurred in a sparsely populated area about 12 miles (20 kilometers) from the Arizona border, near the city of Nogales, that is considered a prime corridor for immigrant and drug smuggling.

The Sonora state Attorney General’s Office said in a statement that nine people were captured by police at the scene of the shootings, six of whom had been wounded in the confrontation. Eight vehicles and seven weapons were also seized.

All of the victims were believed to be members of the gangs.

The shootings occurred near a dirt road between the hamlets of Tubutama and Saric, in an area often used by traffickers.

Gangs often fight for control of trafficking routes and sometimes steal “shipments” of undocumented migrants from each other, but seldom have they staged such mass gun battles.

Gang violence near the Arizona border has led to calls from officials in the U.S. state for greater control of the border and is one reason given for a controversial law passed in April requiring Arizona police to ask people about their immigration status in certain situations.

In a city on another part of the U.S. border, gunmen killed an assistant attorney general for Chihuahua state and one of her bodyguards.

After being chased by armed assailants through the darkened streets of Ciudad Juarez, the vehicle carrying Sandra Salas Garcia and two bodyguards was riddled with bullets Wednesday night.

Arturo Sandoval, a spokesman for the Attorney General’s Office, said the second bodyguard was seriously wounded.

Salas was responsible for evaluating the work of prosecutors and special investigations units in Chihuahua.

More than 23,000 people have been killed by drug violence since late 2006, when President Felipe Calderon began deploying thousands of troops and federal police to drug hot spots.