And he is not the only one:

The chief executive of BP sold £1.4 million of his shares in the fuel giant weeks before the Gulf of Mexico oil spill caused its value to collapse. 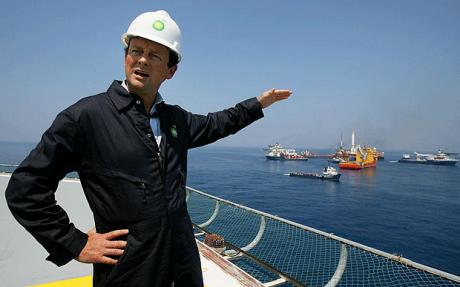 Tony Hayward: ‘This won’t stop deepwater drilling. It will transform it’

Tony Hayward cashed in about a third of his holding in the company one month before a well on the Deepwater Horizon rig burst, causing an environmental disaster.

Mr Hayward, whose pay package is £4 million a year, then paid off the mortgage on his family’s mansion in Kent, which is estimated to be valued at more than £1.2 million.

There is no suggestion that he acted improperly or had prior knowledge that the company was to face the biggest setback in its history.

His decision, however, means he avoided losing more than £423,000 when BP’s share price plunged after the oil spill began six weeks ago.

Since he disposed of 223,288 shares on March 17, the company’s share price has fallen by 30 per cent. About £40 billion has been wiped off its total value. The fall has caused pain not just for BP shareholders, but also for millions of company pension funds and small investors who have money held in tracker funds.

The spill, which has still not been stemmed, has caused a serious environmental crisis and is estimated to cost BP up to £40 billion to clean up.

There was growing confidence yesterday that a new cap placed over the well was stemming the oil flow. An estimated three million litres a day had been pouring into the sea off the coast of Louisiana since the April 20 explosion, damaging marine life.

The crisis has enraged US politicians, with President Obama yesterday forced to cancel a trip to Indonesia amid a row over the White House’s response.

Mr Hayward, whose position is thought to be under threat, risked further fury by continuing plans to pay out a dividend to investors next month.