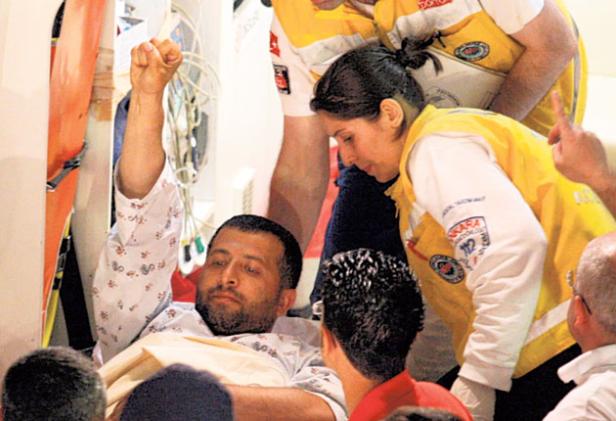 I have, of course, been outraged at armed men boarding ships in international waters, killing passengers on board who attempt to resist and then forcing their ship to the hijackers’ home port. I am, of course, talking about the Somali pirates who are preying on Western ships in the Indian Ocean. How dare those terrorists dare to touch our unarmed vessels on the high seas? And how right we are to have our warships there to prevent such terrorist acts.

But whoops! At least the Israelis have not demanded ransom. They just want to get journalists to win the propaganda war for them. Scarcely had the week begun when Israel’s warrior “commandos” stormed a Turkish boat bringing aid to Gaza and shot nine of the passengers dead. Yet by week’s end, the protesters had become “armed peace activists”, vicious anti-Semites “professing pacifism, seething with hate, pounding away at another human being with a metal pole”. I liked the last bit. The fact that the person being beaten was apparently shooting another human being with a rifle didn’t quite get into this weird version of reality.

Turkish family protests that their sons wanted to be martyrs – something which most Turkish family members might say if their relatives had been shot by the Israelis – had been transformed into confirmation that they had been jihadis. “On that aid ship,” a Sri Lankan texted me this week, “I had my niece, nephew and his wife on board. Unfortunately Ahmed (20-year-old nephew) got shot in the leg and now treated (sic) under military custody. I will keep you posted.” He did indeed. Within hours, the press was at his family’s home in Australia, demanding to know if Ahmed was a jihadi – or even a potential suicide bomber. Propaganda works, you see. We haven’t seen a frame of film from the protesters because the Israelis have stolen the lot. No one has told us – if the Turkish ship was carrying such ruthless men – how their terrible plots to help the “terrorists” of Gaza were not uncovered in the long voyage from Turkey, even when it called at other ports. But Professor Gil Troy of McGill University in Montreal – in the rabid Canadian National Post, of course – was able to spout all that gunk about “armed peace activists” on Thursday.

I wasn’t personally at all surprised at the killings on the Turkish ship. In Lebanon, I’ve seen this indisciplined rabble of an army – as “elite” as the average rabble of Arab armies – shooting at civilians. I saw them watching the Sabra and Shatila massacre of Palestinians on the morning of 18 September (the last day of the slaughter) by their vicious Lebanese militia allies. I was present at the Qana massacre by Israeli gunners in 1996 – “Arabushim” (the equivalent of the abusive term “Ayrab” in English), one of the gunners called the 106 dead civilians, more than half of them children, in the Israeli press. Then the Israeli government of Nobel laureate Shimon Peres said there were terrorists among the dead civilians – totally untrue, but who cares? – and then came the second Qana massacre in 2006 and then the 2008-09 Gaza slaughter of 1,300 Palestinians, most of them children, and then…

Well, then came the Goldstone report, which found that Israeli troops (as well as Hamas) committed war crimes in Gaza, but this was condemned as anti-Semitic – poor old honourable Goldstone, himself a prominent Jewish jurist from South Africa, slandered as “an evil man” by the raving Al Dershowitz of Harvard – and was called “controversial” by the brave Obama administration. “Controversial”, by the way, basically means “fuck you”.

There’s doubts about it, you see. It’s dodgy stuff.

But back to our chronology. Then we had the Mossad murder of a Hamas official in Dubai with the Israelis using at least 19 forged passports from Britain and other countries. And the pathetic response of our then foreign secretary, David Miliband? He called it “an incident” – not the murder of the guy in Dubai, mind you, just the forgery of UK passports, a highly “controversial” matter – and then… Well, now we’ve had the shooting down of nine passengers at sea by more Israeli heroes.

The amazing thing in all this is that so many Western journalists – and I’m including the BBC’s pusillanimous coverage of the Gaza aid ships – are writing like Israeli journalists, while many Israeli journalists are writing about the killings with the courage that Western journalists should demonstrate. And about the Israeli army itself. Take Amos Harel’s devastating report in Haaretz which analyses the make-up of the Israeli army’s officer corps. In the past, many of them came from the leftist kibbutzim tradition, from greater Tel Aviv or from the coastal plain of Sharon. In 1990, only 2 per cent of army cadets were religious Orthodox Jews. Today the figure is 30 per cent. Six of the seven lieutenant-colonels in the Golani Brigade are religious. More than 50 per cent of local commanders are “national” religious in some infantry brigades.

There’s nothing wrong with being religious. But – although Harel does not make this point quite so strongly – many of the Orthodox are supporters of the colonisation of the West Bank and thus oppose a Palestinian state.

And the Orthodox colonists are the Israelis who most hate the Palestinians, who want to erase the chances of a Palestinian state as surely as some Hamas officials would like to erase Israel. Ironically, it was senior officers of the “old” Israeli army who first encouraged the “terrorist” Hamas to build mosques in Gaza – as a counterbalance to the “terrorist” Yasser Arafat up in Beirut – and I was a witness to one of their meetings. But it will stay the same old story before the world wakes up. “I have never known an army as democratic as Israel’s,” the hapless French philosopher Bernard-Henri Lévy said a few hours before the slaughter.

1 thought on “Robert Fisk: The Truth Behind The Israeli Propaganda”