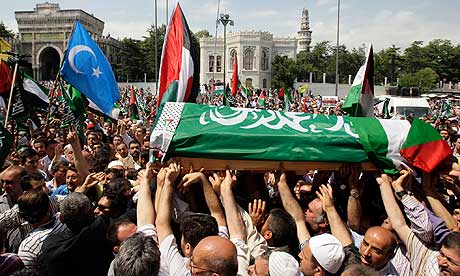 Crowds at the funeral of one of the Turkish victims of the Gaza flotilla raid, at the Beyazit mosque in Istanbul. (AP)

Israel was tonight under pressure to allow an independent inquiry into its assault on the Gaza aid flotilla after autopsy results on the bodies of those killed, obtained by the Guardian, revealed they were peppered with 9mm bullets, many fired at close range.

Nine Turkish men on board the Mavi Marmara were shot a total of 30 times and five were killed by gunshot wounds to the head, according to the vice-chairman of the Turkish council of forensic medicine, which carried out the autopsies for the Turkish ministry of justice today.

The findings emerged as more survivors gave their accounts of the raids. Ismail Patel, the chairman of Leicester-based pro-Palestinian group Friends of al-Aqsa, who returned to Britain today, told how he witnessed some of the fatal shootings and claimed that Israel had operated a “shoot to kill policy”.

He calculated that during the bloodiest part of the assault, Israeli commandos shot one person every minute. One man was fatally shot in the back of the head just two feet in front him and another was shot once between the eyes. He added that as well as the fatally wounded, 48 others were suffering from gunshot wounds and six activists remained missing, suggesting the death toll may increase.

The new information about the manner and intensity of the killings undermines Israel’s insistence that its soldiers opened fire only in self defence and in response to attacks by the activists.

“Given the very disturbing evidence which contradicts the line from the Israeli media and suggests that Israelis have been very selective in the way they have addressed this, there is now an overwhelming need for an international inquiry,” said Andrew Slaughter MP, a member of the all party group on Britain and Palestine.

Israel said tonight the number of bullets found in the bodies did not alter the fact that the soldiers were acting in self defence. “The only situation when a soldier shot was when it was a clearly a life-threatening situation,” said a spokesman for the Israeli embassy in London. “Pulling the trigger quickly can result in a few bullets being in the same body, but does not change the fact they were in a life-threatening situation.”

Protesters from across the country will tomorrow march from Downing Street to the Israeli embassy to call for Israel to be held to account for its actions.

Earlier this week, William Hague, the foreign secretary, said the government would call for an inquiry under international auspices if Israel refuses to establish an independent inquiry, including an international presence.

The autopsy results were released as the last of the Turkish victims was buried.

Dr Haluk Ince, the chairman of the council of forensic medicine in Istanbul, said that in only one case was there a single bullet wound, to the forehead from a distant shot, while every other victim suffered multiple wounds. “All [the bullets] were intact. This is important in a forensic context. When a bullet strikes another place it comes into the body deformed. If it directly comes into the body, the bullet is all intact.”

He added that all but one of the bullets retrieved from the bodies came from 9mm rounds. Of the other round, he said: “It was the first time we have seen this kind of material used in firearms. It was just a container including many types of pellets usually used in shotguns. It penetrated the head region in the temple and we found it intact in the brain.”

An unnamed Israeli commando, who purportedly led the raid on the Mavi Marmara, today told Israeli news website Ynet News that he shot at a protester who approached him with a knife. “I was in front of a number of people with knives and clubs,” he said. “I cocked my weapon when I saw that one was coming towards me with a knife drawn and I fired once. Then another 20 people came at me from all directions and threw me down to the deck below …

“We knew they were peace activists. Though they wanted to break the Gaza blockade, we thought we’d encounter passive resistance, perhaps verbal resistance – we didn’t expect this. Everyone wanted to kill us. We encountered terrorists who wanted to kill us and we did everything we could to prevent unnecessary injury.”

Tonight the Rachel Corrie, an Irish vessel crewed by supporters of the Free Gaza movement, remained on course for Gaza. Yossi Gal, director general at the Israeli foreign ministry, said Israel had “no desire for a confrontation” but asked for the ship to dock at Ashdod, not Gaza.

“If the ship decides to sail the port of Ashdod, then we will ensure its safe arrival and will not board it,” he said.