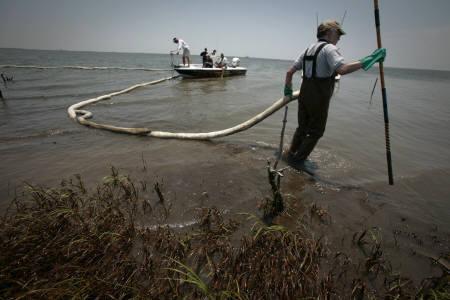 Scientist Douglas Inkley of the National Wildlife Federation pulls a broken oil boom on an island impacted by the Deepwater Horizon oil spill in Barataria Bay, Louisiana May 25, 2010. (REUTERS)

NEW YORK (Reuters) – Just how many barrels of oil are gushing into the Gulf of Mexico from the Deepwater Horizon spill is a billion dollar question with implications that go beyond the environment. It could also help determine how much BP and others end up paying for the disaster.

A clause buried deep in the U.S. Clean Water Act may expose BP and others to civil fines that aren’t limited to any finite cap — unlike a $75 million limit on compensation for economic damages. The Act allows the government to seek civil penalties in court for every drop of oil that spills into U.S. navigable waters, including the area of BP’s leaking well.

As a result, the U.S. government could seek to fine BP or others up to $4,300 for every barrel leaked into the U.S. Gulf, according to legal experts and official documents.

So far, analysts and experts calculating potential oil spill liabilities have mostly concentrated on the cost of the clean-up and compensation for economic damages to affected parties. Some have also discussed criminal liabilities.

But the potential for civil fines has received scant attention — and they could add up very quickly, depending on how aggressive the U.S. government is in pursuing them.

The threat of hefty fines underscores the importance of quantifying how much oil is pouring into the Gulf. As BP seeks to staunch the leak that has now been gushing for at least 33 days, it has estimated a spill rate of 5,000 barrels per day. But some experts say the volume — and hence the fines — could be more than 10 times higher.

The little-known, seldom applied clause in the Clean Water Act was added in 1990 after the Exxon Valdez disaster in Alaska, and was intended to beef up the arsenal of penalties the government can apply to oil spillers to deter future disasters.

“These civil penalties could be staggeringly high, possibly running into the billions,” said Professor David Uhlmann, director of the Environmental Law program at University of Michigan.

Total liability — including civil fines as well as the cost of clean-up, economic damages and potential criminal liability — “will run into the billions and may be in the tens of billions,” Uhlmann said.

Under the Clean Water Act, the Environmental Protection Agency can seek in federal court to fine any party whose negligence results in an oil spill in U.S. federal waters.

Other companies involved at the Horizon platform and the oilfield could share liability with BP, experts said. They include rig-owner Transocean Ltd, cementing contractor Halliburton Co., blowout preventer manufacturer Cameron, and Anadarko and Mitsui, which also hold stakes in the oilfield.

The basic fine, according to the act, is $1,100 per barrel spilled. But the penalty can rise to $4,300 a barrel if a federal court rules the spill resulted from gross negligence. The fines were originally set at $1,000 to $3,000 but that was raised in 2004 to keep up with inflation, according to Tracy Hester, head of the Evironmental Law and Policy program at the University of Houston.

(To see an EPA memo on 2004 revisions to penalties outlined in the Clean Water Act, click here: here )

It is unclear, however, that the EPA would try to apply the fines, or seek maximum penalty levels. EPA officials did not respond to several calls and e-mails requesting comment.

If the agency does act, the per-barrel fines could push oil companies’ liability well beyond the cost of cleaning up the spill and paying legitimate claims for economic damages it causes, experts told Reuters.

“There are civil fines that could be quite substantial. I think BP’s exposure to this is far greater than people initially thought,” said Harvard Law School professor Jody Freeman, who recently served in the White House as Counselor for Energy and Climate Change.

BP has already said it will voluntarily exceed a $75 million cap on liability for economic damages, pledging to pay any “legitimate claim” it receives. But the civil fines are another wild card.

BP spokesman Mark Salt said the company had nothing further to add to what it has said about the costs of the oil spill response.

Cash raised from such fines would be funnelled to government pollution funds, which provide economic aid for hazardous material spills.

BP or other parties facing fines could appeal them, or try to settle with the government for a lesser amount. Another option would be for BP or other responsible parties to seek a far-ranging settlement covering various areas of liability.

“The amount of barrels being released from the well is going to be critical,” said Hester of the University of Houston.

Under pressure over the government’s response to the disaster, President Barack Obama last Friday created a bi-partisan commission on the spill, and the administration has pledged to independently verify the volume of oil leaking into the Gulf. “We’re not depending on what BP is telling us,” Interior Secretary Ken Salazar told CNN last week.