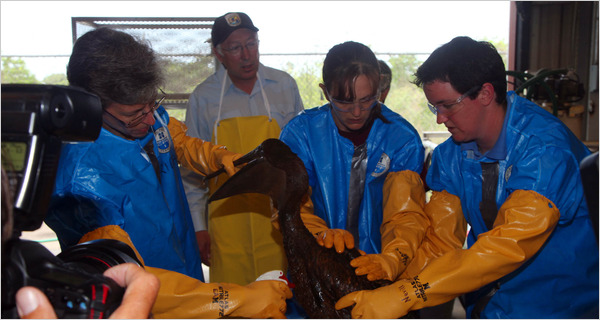 Secretary of the Interior Ken Salazar visited a wildlife treatment center in Louisiana on Saturday.

Scientists are finding enormous oil plumes in the deep waters of the Gulf of Mexico, including one as large as 10 miles long, 3 miles wide and 300 feet thick in spots. The discovery is fresh evidence that the leak from the broken undersea well could be substantially worse than estimates that the government and BP have given.

“There’s a shocking amount of oil in the deep water, relative to what you see in the surface water,” said Samantha Joye, a researcher at the University of Georgia who is involved in one of the first scientific missions to gather details about what is happening in the gulf. “There’s a tremendous amount of oil in multiple layers, three or four or five layers deep in the water column.”

The plumes are depleting the oxygen dissolved in the gulf, worrying scientists, who fear that the oxygen level could eventually fall so low as to kill off much of the sea life near the plumes.

Dr. Joye said the oxygen had already dropped 30 percent near some of the plumes in the month that the broken oil well had been flowing. “If you keep those kinds of rates up, you could draw the oxygen down to very low levels that are dangerous to animals in a couple of months,” she said Saturday. “That is alarming.”

The plumes were discovered by scientists from several universities working aboard the research vessel Pelican, which sailed from Cocodrie, La., on May 3 and has gathered extensive samples and information about the disaster in the gulf.

Scientists studying video of the gushing oil well have tentatively calculated that it could be flowing at a rate of 25,000 to 80,000 barrels of oil a day. The latter figure would be 3.4 million gallons a day. But the government, working from satellite images of the ocean surface, has calculated a flow rate of only 5,000 barrels a day.

BP has resisted entreaties from scientists that they be allowed to use sophisticated instruments at the ocean floor that would give a far more accurate picture of how much oil is really gushing from the well.

“The answer is no to that,” a BP spokesman, Tom Mueller, said on Saturday. “We’re not going to take any extra efforts now to calculate flow there at this point. It’s not relevant to the response effort, and it might even detract from the response effort.”

The undersea plumes may go a long way toward explaining the discrepancy between the flow estimates, suggesting that much of the oil emerging from the well could be lingering far below the sea surface.

The scientists on the Pelican mission, which is backed by the National Oceanic and Atmospheric Administration, the federal agency that monitors the health of the oceans, are not certain why that would be. They say they suspect the heavy use of chemical dispersants, which BP has injected into the stream of oil emerging from the well, may have broken the oil up into droplets too small to rise rapidly.

BP said Saturday at a briefing in Robert, La., that it had resumed undersea application of dispersants, after winning Environmental Protection Agency approval the day before.

“It appears that the application of the subsea dispersant is actually working,” Doug Suttles, BP’s chief operating officer for exploration and production, said Saturday. “The oil in the immediate vicinity of the well and the ships and rigs working in the area is diminished from previous observations.”

Many scientists had hoped the dispersants would cause oil droplets to spread so widely that they would be less of a problem in any one place. If it turns out that is not happening, the strategy could come under greater scrutiny. Dispersants have never been used in an oil leak of this size a mile under the ocean, and their effects at such depth are largely unknown.

Much about the situation below the water is unclear, and the scientists stressed that their results were preliminary. After the April 20 explosion of the Deepwater Horizon, they altered a previously scheduled research mission to focus on the effects of the leak.

Interviewed on Saturday by satellite phone, one researcher aboard the Pelican, Vernon Asper of the University of Southern Mississippi, said the shallowest oil plume the group had detected was at about 2,300 feet, while the deepest was near the seafloor at about 4,200 feet.

“We’re trying to map them, but it’s a tedious process,” Dr. Asper said. “Right now it looks like the oil is moving southwest, not all that rapidly.”

He said they had taken water samples from areas that oil had not yet reached, and would compare those with later samples to judge the impact on the chemistry and biology of the ocean.

While they have detected the plumes and their effects with several types of instruments, the researchers are still not sure about their density, nor do they have a very good fix on the dimensions.

Given their size, the plumes cannot possibly be made of pure oil, but more likely consist of fine droplets of oil suspended in a far greater quantity of water, Dr. Joye said. She added that in places, at least, the plumes might be the consistency of a thin salad dressing.

Dr. Joye said the findings about declining oxygen levels were especially worrisome, since oxygen is so slow to move from the surface of the ocean to the bottom. She suspects that oil-eating bacteria are consuming the oxygen at a feverish clip as they work to break down the plumes.

While the oxygen depletion so far is not enough to kill off sea life, the possibility looms that oxygen levels could fall so low as to create large dead zones, especially at the seafloor. “That’s the big worry,” said Ray Highsmith, head of the Mississippi center that sponsored the mission, known as the National Institute for Undersea Science and Technology.

The Pelican mission is due to end Sunday, but the scientists are seeking federal support to resume it soon.

“This is a new type of event, and it’s critically important that we really understand it, because of the incredible number of oil platforms not only in the Gulf of Mexico but all over the world now,” Dr. Highsmith said. “We need to know what these events are like, and what their outcomes can be, and what can be done to deal with the next one.”