The latest quarterly reports from the big Wall Street banks revealed a startling fact: None of the big four banks had a single day in the quarter in which they lost money trading.

For the 63 straight trading days in Q1, in other words, Goldman Sachs (GS), JP Morgan (JPM), Bank of America (BAC), and Citigroup (C) made money trading for their own accounts.

Trading, of course, is supposed to be a risky business: You win some, you lose some. That’s how traders justify their gargantuan bonuses–their jobs are so risky that they deserve to be paid millions for protecting their firms’ precious capital. (Of course, the only thing that happens if traders fail to protect that capital is that taxpayers bail out the bank and the traders are paid huge “retention” bonuses to prevent them from leaving to trade somewhere else, but that’s a different story).

But these days, trading isn’t risky at all. In fact, it’s safer than walking down the street.

Because the US government is lending money to the big banks at near-zero interest rates. And the banks are then turning around and lending that money back to the US government at 3%-4% interest rates, making 3%+ on the spread. What’s more, the banks are leveraging this trade, borrowing at least $10 for every $1 of equity capital they have, to increase the size of their bets.  Which means the banks can turn relatively small amounts of equity into huge profits–by borrowing from the taxpayer and then lending back to the taxpayer.

Why is the US government still lending banks money at near-zero interest rates? Ostensibly, for the same reason that the government bailed out the banks in the first place: So the banks will lend money to small businesses, big businesses, and other participants in the “real economy.” 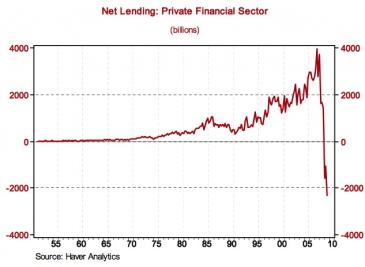 But the banks aren’t lending money to the real economy: Private sector lending has fallen off a cliff. 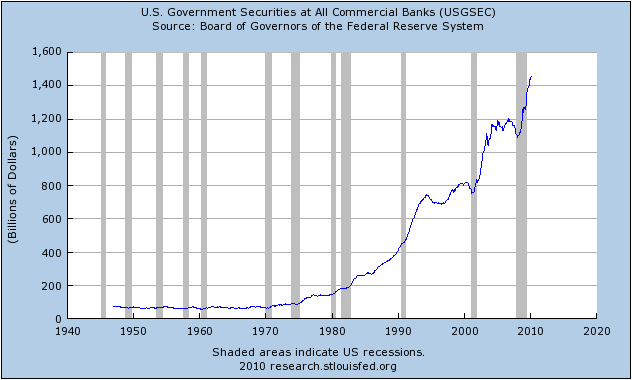 THAT’s how the big banks made money 63 days in a row. Importantly, doing this required no special genius: If you had the good fortune of working at a big bank, you would be making money every day, too.  And then you’d get to take half of that money home as a bonus!

No wonder everyone wants to work on Wall Street.

The government’s zero-interest-rate policy, in other words, is the biggest Wall Street subsidy yet. So far, it has done little to increase the supply of credit in the real economy. But it has hosed responsible people who lived within their means and are now earning next-to-nothing on their savings. It has also allowed the big Wall Street banks to print money to offset all the dumb bets that brought the financial system to the brink of collapse two years ago. And it has fattened Wall Street bonus pools to record levels again.

Related: Here’s How to Make the World’s Easiest $1 Billion

Watch Aaron Task and me rant about this on TechTicker here:

1 thought on “God It’s Great To Be A Banker: None of the big 4 Wall Street banks had a single day in Q1 in which they lost money trading”