Protesters angry at Ireland’s multi-billion efforts to bail out its banks have tried to storm the entrance of the Irish parliament and several have been injured in scuffles with police. 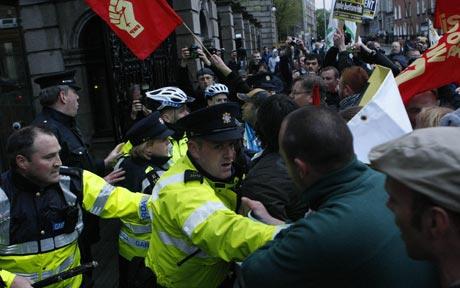 Gardai Clash with protestors marching against government cutbacks outside the Gates of Leinster House in Dublin Photo: PA

Police say officers staffing the wrought-iron gates drew batons and forced back several dozen protesters. They said the protesters’ injuries were minor and none were arrested.

Tens of billions’ worth of dud property loans are being transferred from five Irish banks to a new government-run “bad bank.” The government also has bought multi-billion stakes in Allied Irish Banks and Bank of Ireland.

Gardai said one officer received a minor facial injury during the scuffle.

The march was organised by the Right to Work Campaign, sponsored by the Unite Trade Union.

As the scuffle broke out organisers appealed for calm, which was restored after around a dozen gardai stood at the large iron gates at the front of Leinster House.

Several speakers hit out at the Government’s handling of the economic crisis.

Richard Boyd Barrett, of the People Before Profit Alliance, said there had to be a movement of opposition to the Government.

“They (the Government) are bailing out the banks and the institutions and the elite that caused the crisis and they are asking ordinary people, senior citizens, young people to pay the price with brutal cutbacks and it’s just not acceptable and people are here to say we’re going to stop this and we want an alternative,” he said.

“And an alternative that puts people and jobs and our services and a decent quality of life for everyone at the heart of the economic solution to this crisis.”

Mr Boyd Barrett said he did not see the scuffle and called for peaceful protest.

But he added: “I think it is quite reasonable for people to vent anger against this Government and to say why is Dail Eireann not reflecting the interests of the people?