Alarm over the use of dispersants to combat the huge US oil leak is being raised by Gulf fisherman and scientists alike, warning that even if the spill is held at bay, the chemicals used to do so may do untold damage. 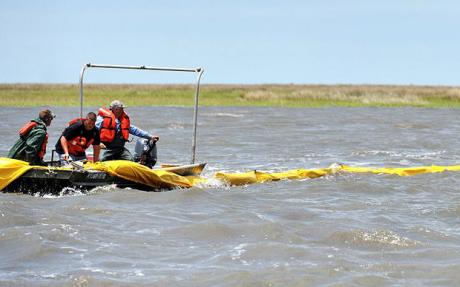 But the effects it will have on marine life, the shoreline and people spraying the chemicals are largely a mystery – an issue raising concerns in itself.

“It’s an unknown quantity,” marine biologist Clarence Laquet said on Sunday as he surveyed the deployment of booms on Lake Machias, one of dozens of marshy inlets along Louisiana’s porous coast threatened by the gushing Gulf wellhead that is spewing some 5,000 barrels of oil, or 210,000 gallons, a day.

The dispersant effort is meant to break down the oil so that over time, the slick is reduced to smaller particles that biodegrade instead of being left as chunky, thick globs that can choke both wildlife and vegetation.

“From what we understand, everything we do in this clean-up process is some sort of trade-off… the dispersant is not as toxic as the oil and it’s better to deal with it out there (in the Gulf) than here,” Laquet said.

For commercial fishers, however, the prospect of any toxic chemicals in waters they rely on for their living seems just as bad as the incoming oil.

“(It’s) going to kill it all off,” 45-year-old shrimp boat captain Ray Nehlig said, referring to his threatened catch.

Nehlig’s crewmembers scrambled Sunday to unload boom from his peeling square-bottomed vessel Barbara Jean, named after his mother, on the windy waters of Lake Machias.

“We got tons of shrimp here right now, but here we are laying boom,” he lamented.

“I’ve been doing this for near 25 years, but the stuff (dispersant) they’re putting in the water to get the oil, it’s going to do just as much damage,” he said.

The oil has been gushing freely for over two weeks, since the BP-leased Deepwater Horizon rig sank some 80km (50 miles) southeast of Venice, Louisiana on April 22, two days after an explosion that killed 11 workers.

Since then, efforts to contain the spread have hinged on ways to cap the leak and the use of C-130 cargo planes carpeting chemicals on vast swaths of the slick.

NALCO Energy Services of Sugar Land, Texas, manufactures the chemical dispersant for BP, which is known by its product name “Corexit.”

The dispersant is a low-level hazardous chemical, posing risks for eye and skin irritations and “chemical pneumonia” but not cancer, according to NALCO data posted on the Deepwater Horizon web site.

The chemicals have been used on oil spills for years, including the notorious Exxon Valdez disaster in Alaska in 1989.

However, LuAnn White, a toxicologist at Tulane University, noted that what is being used now “is a new generation of dispersants, but we don’t know what is in them because it’s a trade secret.'”

Over the weekend, three top Louisiana officials from the departments of health, environmental quality, and wildlife & fisheries published a letter to British Petroleum CEO Tony Hayward requesting more information on the chemical dispersants.

The state secretaries said they had “serious concerns about the lack of information related to the use of dispersants in fighting the oil spill,” as they asked for details on “what impact it could have on our people, water and air quality, as well as the wildlife, fisheries and vegetation.”

Pending test results, the Environmental Protection Agency last week even mandated a complete halt to BP’s unprecedented underwater use of dispersants near the well source – almost a mile down (1.6 kilometers) in the chilly Gulf waters.

“There’s a lot of stuff they’re not telling us” about the dispersent, George Barasich, president of the Louisiana Commercial Fishermen’s Association, warned environmental activists gathered in New Orleans on Saturday, who were rallying against the calamity facing the Gulf coast.

One of the main threats, Barasich said, was the chemicals sterilizing the produce – a catastrophe for the industry in offshore and coastal Louisiana that supplies 41 percent of seafood consumed in the United States.

“The economic impact these people are looking at – they can’t fathom how far it’s going to reach,” he said.