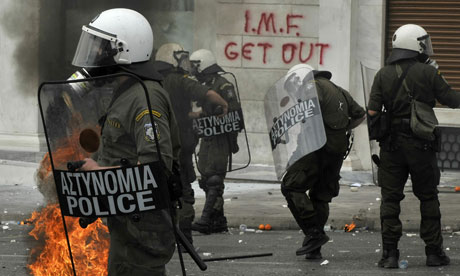 Deep inside the august halls of Athens University, the renowned political commentator Paschos Mandravelis will deliver a message this week that until very recently was lost on most Greeks.

His speech will focus on a single fact: that the country in the centre of the storm of Europe’s worst crisis since the creation of the common market, missed the biggest story ever – its own looming bankruptcy. “Everyone,” he says, “starting with the Greek media, was in an incredible state of denial.”

Last week escapism was no longer an option as Greece’s debt drama claimed its first lives and the nation, teetering on the brink of economic collapse, erupted into violent protests over unprecedented austerity measures.

The deaths on Wednesday of three Greeks, killed in a fire set off by hooded youths throwing petrol bombs into the bank in which they worked, has been the wake-up call – one more shocking than ever thought – to ask questions Greeks would have preferred never to ask.

Yesterday, as tributes continued to pour in for the victims – a man and two women, all recent British university graduates who had shown up for work despite a general strike for fear of losing their jobs – they were asking: “How could it come to this?”

“Greece,” says Mandravelis, “is not only confronted with economic failure but a media failure and political failure, and that is what is so frightening.”

The financial, and increasingly social, crisis gripping the country has, say analysts, brought the nation face to face with a myth: the myth of a democratic state that thrived not on meritocracy and progress but cronyism and corruption after the last chapter of its troubled history ended with the collapse of military rule in 1974.

As Athens prepares to receive the biggest bailout in history – up to €120bn dispensed from the EU and IMF over the next three years – the consensus is that Greece has reached rock bottom. A point so low that even Brigadier Stylianos Pattakos, the last of the dictators still alive, feels unabashedly vindicated. “In our time,” he told the Observer in an interview, “there was no debt. Not one drachma went astray. The Greeks are not disciplined like the Germans or the British. They need authority.”

Today the junta is embodied not by the likes of Pattakos, who at the age of 98 has no qualms about his role in quashing liberty in the birthplace of democracy, but the IMF. For the unions and tens of thousands who took to the streets last week – and are girding their loins for the “mother of all battles” in the weeks and months ahead – the Washington-based body is neither saint nor saviour.

Prime minister George Papandreou agreed to activate the emergency international aid after it became clear two weeks ago that Greece was heading for sovereign default, unable to refinance its staggering €300bn (£259bn) debt because of prohibitively high borrowing costs on international markets.

But for those on the left, leading the protests with flags emblazoned with the hammer and sickle, the intervention of the IMF has been the tipping point. The majority of Greeks not only see it as the harbinger of harsh economic reforms but the symbol of foreign occupation. For the abundance of conspiracy theorists on both the left and right, its involvement is part of a grander, but seemingly no less implausible, plan to subjugate Greece after draining the country of its resources.

“This has gone beyond economic matters to a battle for national independence,” says Manolis Glezos, the leftist who shot to fame snatching the swastika from the Acropolis shortly after Hitler’s forces streamed into Athens in 1941.

“Papandreou himself has admitted we had no say in the economic measures thrust upon us. They were decided by the EU and IMF. We are now under foreign supervision and that raises questions about our economic, military and political independence.”

At approaching 88, Glezos embodies the Greek spirit of resistance – a leading light in the struggle against Nazi occupation, bloody civil war, authoritarian right-wing rule and the seven-year military dictatorship that ended with Pattakos sending a tank crashing through the gates of the Athens Polytechnic to crush the students’ revolt that would pave the way to the regime’s demise.

“We are,” he says, “neither at the middle nor the end of political developments, of protesting what is happening in this country. We are at the beginning.”

The Greeks’ innate anti-authoritarianism, a legacy of 400 years of Ottoman rule, is also at the heart of the problem that has helped to push their country to what President Karolos Papoulias described last week as “the brink of the abyss”.

More than any other European nation, the Greeks think nothing of taking to the streets in noisy outbursts of protests. But more than that, in a culture of cutting corners, they also have a problem with being told what to do. It is an attitude that could have profound consequences for Papandreou’s ability to enforce policies that include painful wage and pension cuts – and the course of the crisis.

“The capriciousness of Ottoman rule and the weakness of the idea of the rule of law helped to shape the underlying values of Greek society and to determine attitudes to the state and to authorities that have persisted into the present,” wrote Richard Clogg, Britain’s pre-eminent historian of modern Greece.

Nothing encapsulates the strained relationship with authority more than the nation’s predilection for avoiding the taxman – a hobby that has helped to push the public deficit to a European record – and Greeks’ love-hate relationship with the state.

Assuming power after five years of scandal-plagued conservative rule last October, the Socialist government discovered that the tax inspectorate had virtually collapsed with revenue losses from tax evasion surpassing €20bn, more than any other eurozone nation.

It also emerged that fewer than 15,000 Greeks declare incomes of over €100,000, despite tens of thousands living in opulent wealth on the outskirts of the capital. A new drive by the Socialists to track down swimming pool owners by deploying Google Earth was met with a virulent response as Greeks invested in fake grass, camouflage and asphalt to hide the tax liabilities from the spies in space.

The country’s black economy – estimated conservatively at 30% – has also helped to bring public finances to the point of meltdown.

“When the rest of Europe were living in dukedoms and refining democratic institutions, we were part of a huge empire living in an agrarian and feudal Balkan state,” said Nikos Dimou, author of the best-selling book The Misfortune of Being Greek. “We had little relationship to our glorious past. Our institutions were imported or thrust upon us, our identity both eastern and western. It created a human being that feels very strange in his skin, culturally very different to other Europeans.”

Dimou wrote the book in the latter years of the junta, but with ordinary Greeks now embroiled in the sort of soul-searching last seen at the end of the junta, the tome is selling like hotcakes. “Greeks want to know why they have got to this point, what went wrong,” he says.

The austerity measures that have provoked such unrest aim to trim the budget of €30bn through 2012. Almost all are targeted at the country’s dysfunctional and bloated public sector.

“Papandreou is paying for the sins of his father [former prime minister] Andreas, under whom Greece’s debt soared,” added Dimou. “The cuts he will have to make have never been made before. It is all very new.”

But with poverty growing and the country’s militant Communist party insisting that “the plutocracy pay” for the crisis, Greece could also be headed for a new class warfare the likes of which have never been seen before. Some commentators have not ruled out kidnappings and assassinations as Greek turns against Greek in the months ahead.

The conspiracy of silence that has marked Greece’s troubles may be over, but the battle that could tear it apart has only just begun.

Helena Smith in Athens
Sunday 9 May 2010