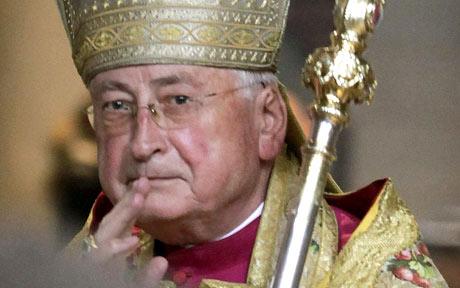 A spokesman for the diocese of Eichstaett said the accusations referred to a time between 1996 and 2000 when Mixa was bishop of Eichstaett, which like Augsburg is in predominantly Catholic Bavaria.

The Augsburg diocese said it had provided information to prosecutors after a meticulous examination of the accusations.

The Augsburger Allgemeine newspaper reported, without naming its sources, that Mixa was accused of abusing a boy while bishop of Eichstaett.

Mixa’s lawyer, Gerhard Decker, has denied the accusations against the 69-year old bishop, who also faces allegations of financial misconduct, and said Mixa would work with prosecutors to clear up the matter.

Mixa wrote to the pope in April to offer his resignation, after denying for weeks that he had hit children in the 1970s and 1980s before later admitting he had slapped them. Some victims say he hit them with full force in the face.

The accusations against Mixa revealed on Friday were the first made of sexual abuse. He had previously asked for forgiveness from those he says he may have slighted.

A survey published last month found a quarter of Germany’s Catholics were considering leaving the church over the abuse allegations, the greatest crisis in Benedict’s five-year pontificate.

Belgian bishops concluded a week-long visit to the Vatican on Saturday with a rare press conference in which they spoke of the pain caused by the scandal which led to the resignation last month of the bishop of Bruges, Roger Vangheluwe.

He stepped down after admitting he had sexually abused a boy when in charge of the diocese of Bruges, the first such case to be made public in Belgium — although a church commission said it was investigating about 20 other allegations of sex abuse.

The Pope briefly referred to the case in his speech to the Belgian bishops, saying their church had been “tested by sin.”