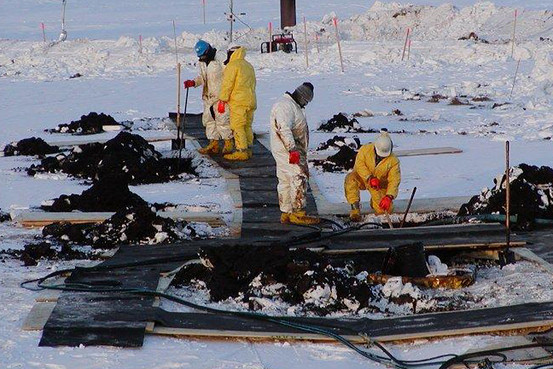 The corporation at the heart of the current Gulf of Mexico oil-drilling disaster is by far the most important oil company in Alaska. But even before a BP contractor’s oil rig exploded in the Gulf last month, BP faced the oil industry’s highest-profile string of environmental and safety problems in the last decade.

BP Alaska spokesman Steve Rinehart declined to answer questions about the company’s track record, saying only, “We are a responsible, professional operator. We work to high standards. Safety is our highest priority.”

BP runs oil production on the North Slope for itself and a handful of other companies. It operates two offshore drilling operations from man-made islands in the Beaufort Sea. And it has approval this year to drill a record-setting eight miles into the Arctic Ocean to tap a new reservoir.

But its accidents and scandals ranged from a refinery explosion that killed 15 people in Texas City in 2005 to a 212,000-gallon oil spill in Alaska from a corroded pipeline that had not been thoroughly inspected in years. Both came in a five-year period during which BP earned $70 billion in profit.

The problems prompted congressional hearings, leadership shake-ups and unprecedented civil and criminal penalties that reached into the hundreds of millions of dollars. In 2007, the new chief executive of BP America told Congress his company was turning over a new leaf.

“These experiences have changed BP and all of us who work for the company,” BP America CEO Robert Malone said at the time. “We are determined to learn from what happened and to become a better, stronger company.”

But BP’s troubles didn’t end there.

Earlier this year, two congressmen wrote the head of BP Alaska, arguing that four incidents in 2008 and 2009 suggested BP still ran a dangerous operation on the North Slope. In one case a high-pressure gasoline pipeline blew apart, while another backed up, according to a letter first unearthed by the website Propublica.org.

Meanwhile, state and federal investigators are still looking into a North Slope spill of 46,000 gallons that occurred in November 2009. At the time BP was still on probation stemming from a previous criminal conviction for environmental and safety problems.

Certainly BP has long been image-conscious. The company has spent millions running TV ads highlighting its efforts to move “beyond petroleum,” and its executives have generally been obsequious with public officials. Regulators who spent countless hours in meetings with BP officials during the mid-2000s said the company appeared sincere about doing things right — even in the middle of battles.

“They were professional, responsible, but that doesn’t mean there weren’t serious disagreements,” said Michelle Brown, former head of Alaska’s DEC.

Jim Ayers, former chief of staff to ex-Alaska Gov. Tony Knowles, said, “BP’s character has been ‘We want to be good citizens.’ They just don’t always hold themselves accountable, particularly when they have partners they can share responsibility with — or blame.”

As is the case in the Gulf, it was a BP contractor that first got the company in trouble in Alaska. A whistle-blower revealed that throughout the mid-1990s the contractor had injected toxic waste into the wells at its drill site on Endicott Island off Prudhoe Bay rather than ship it off the North Slope.

In 2000, BP paid a $22 million fine, pleaded guilty to a criminal charge and agreed to five years of probation. The company said it had not known about the dumping until the whistle-blower came forward.

Then in March 2006, a major oil leak soiled the tundra from a corroded pipeline. BP promised it had the situation under control, but that August a second leak appeared, requiring an oil shutdown at Prudhoe Bay.

Congressional investigators learned that the crews on other major pipelines regularly sent inspection “pigs” through the lines to seek out wear and tear, but that BP had not done so since 1998.

A federal grand jury subpoenaed records from a Seattle engineering firm that had been hired by Alaska to evaluate BP’s pipeline-maintenance record. A draft report had been critical of BP, but the final version was largely complimentary. The draft was discovered during the grand jury’s investigation.

Both the engineering firm and BP maintained that no one was pressured to change the report, but coming on the heels of the Texas City refinery explosion, members of Congress were livid. Several called it a cover-up.

“They (BP) decided to quash that information from the public,” said Rep. Jay Inslee, D-Bainbridge Island. He called it “a conscious, willful decision by the particular corporation involved here.”

By 2007, BP faced two more criminal charges and much greater scrutiny as a result of the pipeline leaks and Texas explosion. Last year the state of Alaska sued BP, demanding millions of dollars as reimbursement for the oil revenue it lost while BP was not in production.