Catastrophic collapse: More than three million colonies in America and billions of bees worldwide have died since 2006

The world faces a future with little meat and no cotton because of a catastrophic collapse in bee colonies, experts have warned.

Many vital crops are dependent on pollination by honeybees, but latest figures show a third failed to survive the winter in the U.S.

More than three million colonies in America and billions of bees worldwide have died since 2006.

Pesticides are believed to be a key cause of a crisis known as Colony Collapse  Disorder (CDD), damaging bee health and making them more susceptible to disease.

But scientists do not know for certain and are at a loss how to prevent the disaster. Other potential factors include bloodsucking parasites and infections.

Some experts believe bees are heading for extinction.

The number of managed honeybee colonies in the U.S. fell by 34 per cent last  winter, according to a survey by the country’s Agricultural Research Service,  and some commercial beekeepers have reported losses of more than 60 per cent over a year.

In Britain, the latest report into the fate of the estimated 250,000 honeybee  colonies is expected this month after losses of up to a third in the last two winters.

Bees are a critical part of the food chain because flowering plants depend on  insects for pollination and the honeybee is the most effective.

It pollinates 90 commercial crops worldwide, including most fruit and  vegetables – from apples to carrots – alfalfa for cattle feed, nuts, oil-seed  rape and cotton.

A world without honeybees would mean a largely meatless diet of rice and  cereals, no cotton for textiles, no orchards or wildflowers and decimation  among wild birds and animals in the bee food chain.

Bees are worth £26 billion to the global economy, and £200 million in Britain.

‘Bees contribute to global food security and their extinction would represent a  terrible biological disaster,’ said Bernard Vallat of the World Organisation  for Animal Health.

U.S. scientists have found 121 different pesticides in samples of bees, wax and  pollen, increasing fears that pesticides are a key problem.

The wipe-out of so many colonies has been dubbed ‘Marie Celeste’ syndrome  because many hives have been found empty, with no sign of dead bees.

The British government’s National Bee Unit denies the existence of CDD over  here, blaming the bloodsucking varroa mite and rainy summers that have stopped  bees foraging for food. 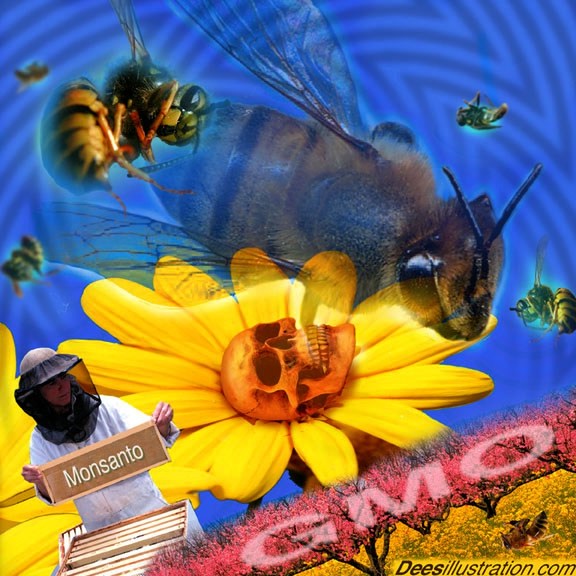