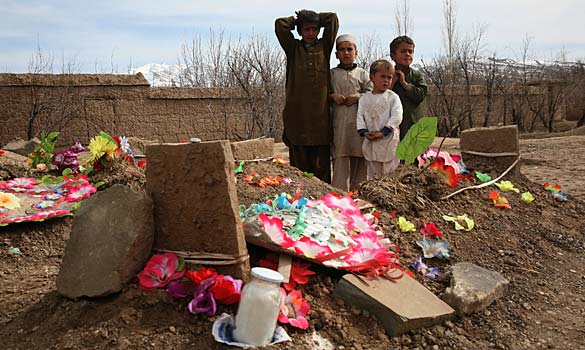 Relatives at the graves of five people killed, including three women, during the night raid

US special forces soldiers dug bullets out of their victims’ bodies in the bloody aftermath of a botched night raid, then washed the wounds with alcohol before lying to their superiors about what happened, Afghan investigators have told The Times.

Two pregnant women, a teenage girl, a police officer and his brother were shot on February 12 when US and Afghan special forces stormed their home in Khataba village, outside Gardez in eastern Afghanistan. The precise composition of the force has never been made public.

The claims were made as Nato admitted responsibility for all the deaths for the first time last night. It had initially claimed that the women had been dead for several hours when the assault force discovered their bodies.

“Despite earlier reports we have determined that the women were accidentally killed as a result of the joint force firing at the men,” said Lieutenant-Colonel Todd Breasseale, a Nato spokesman. The coalition continued to deny that there had been a cover-up and said that its legal investigation, which is ongoing, had found no evidence of inappropriate conduct.

The Kabul headquarters of General Stanley McChrystal, the commander of US and Nato forces, claimed originally that the women had been “tied up, gagged and killed”.

A senior Afghan official involved in a government investigation told The Times: “I think the special forces lied to McChrystal.”

“Why did the special forces collect their bullets from the area?” the official said. “They washed the area of the injuries with alcohol and brought out the bullets from the dead bodies. The bodies showed there were big holes.”

The official, who asked not to be named until the results of the investigation have been made public, said that the assault force sealed off the compound from 4am, when the raid started, to 11am, when Afghan officials from Gardez were finally allowed access to the house.

At least 11 bullets were fired during the raid, the investigator said, and the shooting was carried out by two American gunmen positioned on the roof of the compound. Only seven bullets were recovered from the scene.

“I asked McChrystal, ‘why did the Americans clean some of the bullets from the area?’ They don’t have the right to do that,” the official said.

Haji Sharabuddin, the head of the family who were attacked, told The Times last month that troops removed bullets from his relatives’ bodies, but his claims were impossible to verify. The hallway where four of the five victims were killed had been repainted and at least two bullet holes had been plastered over.

Video footage of the raid’s aftermath, collected by Afghan investigators, shows close-up shots of one man’s bloodstained and punctured torso and walls with blood on them. The Afghan official’s conclusion that the bullets were removed is based on the testimony of survivors, analysis of the photographs and the missing bullets.

Nato promised a joint forensic investigation in a statement issued after the raid, but Rear Admiral Greg Smith, the coalition’s director of communications in Afghanistan, said that this had proved impossible because the bodies were buried the same day in accordance with Islamic custom.

Instead Afghanistan’s Ministry of Interior sent its top criminal investigator from Kabul, and a Canadian brigadier-general led a separate military inquiry.

The Afghan investigation differed in one respect from The Times’ findings. Survivors told this newspaper that Saranwal Zahir, the police officer’s brother, was shot when he tried to shout that his family was innocent. The women, who were crouching behind him, were killed in the same volley of fire. Afghan investigators believe that Mr Zahir was carrying an AK47 and wanted to avenge his brother’s killers. The women were clustered around him, trying to pull him inside the house, when the second US gunman opened fire, killing all four of them.

Footage collected by the Afghan team also shows a man in United States Army uniform taking pictures of the bodies. The findings have not been made public. The Interior Ministry is expected to pass a report to the Attorney-General’s office, which will decide whether or not it can press criminal charges.

The family had more than 25 guests on the night of the attack, as well as three musicians, to celebrate the naming of a newborn child.

“In what culture in the world do you invite … people for a party and meanwhile kill three women?” asked the senior official. “The dead bodies were just eight metres from where they were preparing the food. The Americans, they told us the women were dead for 14 hours.”

In a statement yesterday, Brigadier-General Eric Tremblay, a Nato spokesman, said: “We deeply regret the outcome of this operation, accept responsibility for our actions that night, and know that this loss will be felt forever by the families.

“The force went to the compound based on reliable information in search of a Taleban insurgent, and believed that the two men posed a threat to their personal safety. We now understand that the men killed were only trying to protect their families.”

3 thoughts on “US special forces soldiers dug bullets out of their victims’ bodies in the bloody aftermath of a botched night raid, then washed the wounds with alcohol before lying to their superiors about what happened”